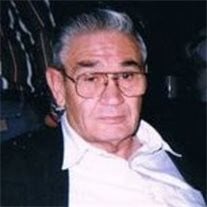 Lyle Lewis Irwin was born at Ainsworth, Nebraska on April 7, 1935 to Mark Benjamin and Rachel Mary (Wigent) Irwin, and passed away on December 9, 2013 at the Brown County Hospital in Ainsworth, Nebraska. He was the fourth in a family of seven. His early childhood was spent on a ranch south of Ainsworth and attended school there until his family moved to town. He attended grade school and high school in Ainsworth and graduated from high school in 1953. After graduation he joined his father and brother in the auto business where he worked until he retired in 1997. Lyle was united in marriage to Joan "Jo" Brenneman on June 17, 1955 at Ainsworth and to this union was born one son, Rick. Lyle and Jo celebrated their 58th wedding anniversary this past June. In Lyle's earlier years, his favorite pastime activities were roller skating at the local rinks, (of which he was an expert.) He also enjoyed hunting, fishing and playing horse shoes. For many years he and Jo belonged to several Square Dance Clubs. In recent years they regularly attended the Ainsworth Senior Center, where Lyle volunteered to deliver meals to the shut-ins. Lyle enjoyed playing all kinds of card games and Pool. He was also an avid bowler and was very proud of his 289 game and a 715 series. Lyle was especially proud of his grandchildren. He was always interested in their school activities and their deer hunting skills. Over the years the Irwins attended a variety of Antique shows. They became a part of that circuit for 51 years and had met a circle of friends from a variety of states. Lyle is survived by his wife Jo, son, Rick and his wife Shelli; his brother, Paul and his wife Donna all of Ainsworth. Sisters, Evelyn Allen of Bassett, Nebraska, Bonnie Osbonre of Larned, Kansas, and Mary Bidner of British Columbia, Canada. Three grandchildren, Karsyn, Caeleb, and Rhion Irwin; two aunts, Opal Irwin of Callaway, Nebraska and Helen Irwin of Hot Springs, South Dakota, along with several nieces, nephews, and cousins. Memorial services were held on Saturday, December 14, 2013 at Hoch Funeral Home in Ainsworth with Pastor Neva Murphy officiating at the service. Special music was offered by Duane & Bob Keim, singing "It's Not the First Mile" and "The Far Side Banks of Jordan." Honorary Bearers were: All of Lyle's Family & Friends. Inurnment will be held at a later date at the Ainsworth Cemetery in Ainsworth, Nebraska. In lieu of flowers, memorials were directed to the Ainsworth Senior Center or to the family for a future designation.

Lyle Lewis Irwin was born at Ainsworth, Nebraska on April 7, 1935 to Mark Benjamin and Rachel Mary (Wigent) Irwin, and passed away on December 9, 2013 at the Brown County Hospital in Ainsworth, Nebraska. He was the fourth in a family of seven.... View Obituary & Service Information

The family of Mr. Lyle L. Irwin created this Life Tributes page to make it easy to share your memories.

Lyle Lewis Irwin was born at Ainsworth, Nebraska on April 7,...