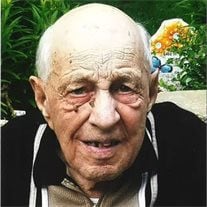 Lyle Henry Davis, son of Freeman and Gladys Davis, was born at home in Selden, Nebraska (Rock County) on July 12, 1923. He passed away on July 19, 2016 at Silver Ridge Memory Unit in Gretna, Nebraska, where he had been residing since May 30, 2016. His age was 93 years, 1 week at the time of his death. As a child, Lyle attended elementary school at District 72-Ewing School and then moved six miles south to District 2. He graduated from Rock County High School in Bassett, Nebraska, in 1940 after which he returned to the family ranch south of Bassett to work with his father. Ranching was his business and his life for three years. Ranching appeared to be his destiny, but World War II changed all of that. On June 27, 1944, Lyle joined the United States Navy and was stationed in Farragut, Idaho; San Diego; Treasure Island; and San Francisco before being discharged on December 17, 1945. Lyle met his future wife, Pauline Ruth Kelly at a dance in Bassett, while he was home on leave from the Navy in September, 1945. They were united in marriage on May 25, 1946. In the spring of 1946, Lyle was offered a position coaching boxing at RCHS and he gladly accepted. During this coaching tenure, Lyle and his brother Lawrence, decided to begin a stringent training program in preparation for competition in the Golden Gloves in Norfolk, Nebraska. Unfortunately, as the competition was nearing, Lyle was injured while training and was unable to compete. His brother did however compete and won the heavy weight championship. Lyle and Pauline moved to Bassett from the ranch in January, 1949 when he accepted a job with H & M Chevrolet. In the spring of 1968, Wayne Marcellus closed his Bassett dealership so Lyle accepted a sales position for Loran Ritter's Chevrolet-Oldsmobile dealership in Ainsworth. Throughout the years, this dealership changed owners several times, but Lyle retained his sales position. Over the 51 years that Lyle was a General Motors salesman, he was the recipient of numerous awards in recognition of faithful years of service, commendable leadership and noteworthy number of sales. On October 1, 1999, Lyle officially retired from his sales career. However, he was not yet ready to be a man of leisure! Lyle had taken and passed the Civil Service exam in 1967 and worked for several more years at the United States Post Office, eventually earning a government retirement. Three children were born to the union of Lyle and Pauline, Steven on March 27, 1949, Rita Sue on March 10, 1951 and Michael on December 4, 1952. Throughout their children's school years from elementary through college, Lyle and Pauline's focus was on school activities. They were so devoted to RCHS sporting activities that the high school awarded them life-time passes to all "home" sporting events. They truly were dedicated to supporting their children and the school! As far as recreational activities and hobbies, Lyle's centered on sports. After he was first married and moved into Bassett from the ranch in 1949, he began playing baseball. He first played on Bassett's "hired team" and after that he played on Bassett's town team for many years. His active participation was replaced with coaching when his boys were old enough to play. Because of his love of the sport, he once admitted that baseball controlled his springs and summers for over 20 years. During this time frame as well as up to the time of his death, he watched as many televised Chicago Cubs games as he could find! Through good years and bad, Lyle was a devoted Cubs fan! After baseball, Lyle started playing golf and was "hooked after his first swing." For years he walked and later drove the course at the Bassett Country Club determined to make each round better than the last! After his wife's death, Lyle moved to Omaha to make his home with his daughter and son-in-law, Doug and Rita Sue Parr. It was there that he was able to make wonderful memories for approximately 10 years with his children, grandchildren, and great grandchildren. It wasn't until May 30, 2016, that his health deteriorated to the point that assistance from the Silver Ridge Memory Unit became necessary. Lyle was preceded in death by his wife, Pauline; his parents, Freeman and Gladys Davis; and his brother, Donald Davis. Survivors include his sons, Steven and wife, Margaret, of Omaha, Nebraska, Michael and his wife, Maggie of Omaha; daughter, Rita Sue and husband Doug Parr of Omaha; grandchildren, Amanda (Davis) Howe (Jim); Katy (Davis)Kiger (Jacob), and Courtney Davis (fiancé Matt Safford); Jon Parr (Sarah), Jessica (Parr) Hendrick (Andrew); five great-grandchildren; and siblings, Lawrence (Tina) of Colorado Springs, Colorado, Audrey (Dale) Caskey of Bassett, and Lois (Ivan) Stewart of Valentine, Nebraska. Funeral Services were held on July 30, 2016 at the United Methodist Church in Bassett, Nebraska. Pastor Rod Heilbrun officiated at the service. Music was provided by JoAnn Swanson. The Congregation sang "How Great Thou Art." CD Selections of "Could I Have This Dance" by Anne Murray and "Heaven" by Kristie Sybrant Keller and Judith Sybrant Lemp were played. Memories of our Grandpa were shared by Jessica Hendrick and Amanda Howe, and Bella Hagedorn. Pallbearers were Jon Parr, Andrew Hendrick, Jim Howe, Jacob Kiger, Jeremy Davis, Devon Davis and Matt Safford. Burial followed at the Bassett Memorial Park Cemetery with Military Honors by the Bassett American Legion Post #123. Hoch Funeral Home was in charge of the arrangements. Memorials were directed to the family in his name.

Lyle Henry Davis, son of Freeman and Gladys Davis, was born at home in Selden, Nebraska (Rock County) on July 12, 1923. He passed away on July 19, 2016 at Silver Ridge Memory Unit in Gretna, Nebraska, where he had been residing since May 30,... View Obituary & Service Information

The family of Mr. Lyle Henry Davis created this Life Tributes page to make it easy to share your memories.

Lyle Henry Davis, son of Freeman and Gladys Davis, was born at...