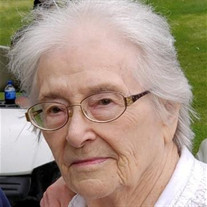 Luanne Richardson was born in McCook, Nebraska to Dr. Robert O. Watkins and Neva (Taylor) Watkins on September 30, 1931 and passed away on December 18, 2019 at the Valley County Hospital in Ord, Nebraska. Luanne was the older of 2 children. Luanne attended Curtis High School and graduated in 1949. She attended the University of Nebraska for a couple of years. While at the University she became a member of the Delta Delta Delta Sorority and met who was to become her partner for life, Donald E. Richardson of Ainsworth, Nebraska. On June 16, 1952, Luanne and Don were married and in 1953, their eldest daughter Pamela was born. In the year of 1956, Don and Luanne’s second daughter Dawn Denise was born. Luanne was actively involved with her daughters while they attended school in Ainsworth. She supported their many school functions including Job’s Daughters. Luanne was a member of the PEO Sisterhood as well, and actively taught Sunday School at the Congregational Church for several years. During the time of living in Ainsworth, during the 1970’s and 80’s, the town was booming with new businesses and young families with a strong support of Ainsworth schools and activities. Ainsworth became a very social town as well. While husband Don was “Mr. Public Relations”, Luanne would be close behind talking, laughing and engaging with everyone. Luanne was always there not only for her family, but friendships made throughout her lifetime in Ainsworth. Luanne exuded special talents with arts and crafts. Her passion for dogs, especially rescue dogs, was a sense of duty for her. Luanne was preceded in death by both parents; Dr. Robert Watkins and Neva Taylor. Luanne is survived by her daughters, Pamela Richardson of Lincoln, Nebraska, Dawn Denise and Dave Dobbins of Lexington, Grandchildren, Abby Dobbins, Jessica and Eddie Morales of Lexington, Nebraska; and Zach Marshall of Ft. Lauderdale, Florida, and six great-grandchildren. Luanne is also survived by her brother Bob Watkins whom resides with his wife Mary Lou, children and grandchildren in Lincoln, Nebraska. While Luanne is no longer with us, we take comfort knowing she had a fulfilled life and is now with Donnie. A Celebration of Life Service was held Monday, December 23, 2019 at the Hoch Funeral Home in Ainsworth with Pastor David Randall officiating at the service. Special remarks and a poem were given by granddaughter Abby Dobbins. Memorials were suggested to the family in her name for future designation. Condolences may be left on Hoch Funeral Home’s online guest book at www.hochfuneralhome.com.

Luanne Richardson was born in McCook, Nebraska to Dr. Robert O. Watkins and Neva (Taylor) Watkins on September 30, 1931 and passed away on December 18, 2019 at the Valley County Hospital in Ord, Nebraska. Luanne was the older of 2 children.... View Obituary & Service Information

The family of Luanne B. (Watkins) Richardson created this Life Tributes page to make it easy to share your memories.

Luanne Richardson was born in McCook, Nebraska to Dr. Robert...