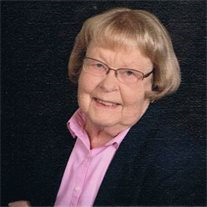 Louise Ann "LouAnn" (Weber) Williams was born at home on May 26, 1937 in Butte, Nebraska to Minnie (Tiefenthaler) Weber and Raymond J. Weber. She passed away Monday, June 12, 2017 at Great Plains Regional Medical Center in North Platte, Nebraska at the age of 80 years. LouAnn attended Saints Peter and Paul Catholic grade school and graduated from Butte Public High School in 1955. After graduation, she moved south of Long Pine, Nebraska and taught rural school. During that time, she met "Wild" Bill Williams (William Robert Williams Sr.) at a dance at The Palace in Long Pine. On August 3, 1957 she was united in marriage to Bill in Butte. To this union three children were born; Pamela Sue, Colleen Ann, and William Robert Williams Junior. Following their marriage the couple lived and raised their family at "The Diamond J at the End of the Way" Ranch 13 miles northwest of Ainsworth, Nebraska. LouAnn was an instrumental part of the success of the ranch and was actively involved in every aspect of ranch life from cooking for family and friends, gardening, farming, book keeping, and cattle ranching. While Bill was the "Idea Man," LouAnn was the voice of reason. Together they enjoyed continuous family visits from all, and built a life on love, family and the land they both loved. Her teaching career started in Long Pine after high school, and continued south of the Norden Bridge, Meadville, District 7, and Raven School. While being a full time wife, mother, and teacher, she attended and received her Bachelor Degree in Education from Chadron State College. Teaching was her passion, and she enjoyed every aspect of it. She made a positive impact on each and every one of her students and had many fond memories of them. She was a 4-H member during her youth, a 4-H Leader in Brown County, and was a life long supporter of 4-H. She loved Speech and Demonstrations, Clothing, Sewing and Style Review, Cooking projects, Cattle, and sat through hundreds of horse shows. It didn't matter if she was interested or not, if her children or grandchildren wanted to explore a 4-H project, she was their number one supporter, cheerleader, and taught them to do their best in everything that they did. She understood the importance of public speaking, and all of her children and grandchildren were always involved through the 4-H Public Speaking and Demonstration Contests. LouAnn was an active member of the St. Pius X Catholic Church, Kappa Kappa Iota, Cub Scout Den Mother, and Weight Watcher Life Time member and Leader. In her retirement she enjoyed playing cards, volunteering at the Thrift Shop, going to the Senior Center, taking trips, sewing, quilting, working at the Morrows Firework Stand, spending time with family and friends, and most of all spending time with her grandchildren, Jenna and Jensen. They were the apple of her eye, and she taught them so many things by her example, patience, and unconditional love. She was preceded in death by her husband; parents; and numerous in-laws. LouAnn is survived by her three children, Dr. Pamela Williams of Anchorage, Alaska, Colleen Williams-Pettigrew and husband Kevin of Valentine, Nebraska, William "Will" Williams Jr. and wife Rachel of Ainsworth; two grandchildren, Jenna and Jensen Williams of Ainsworth; three sisters, Rosemary Root and husband Dick of Akron, Iowa, Marilyn Clopton of Oak Parks, Illinois, and Irma Burbach and husband Dick of Vermillion, South Dakota. Brothers-in-law, Harold Dean Williams of Ainsworth, and David Clopton of Springview, Nebraska. Sisters-in-law, Dorothy Kienker of Central City, Nebraska, Wilma Williams of Buena Vista, Colorado, and Helen Eggert of Camarillo, California; along with nieces, nephews, and other family members. Funeral services were held on Monday, June 19, 2017 at the St. Pius X Catholic Church in Ainsworth, Nebraska with Father Phil Flott officiating the service. Music was provided by Nichole Flynn and Jason Nelson. Special song selections of "Be Not Afraid," "In Christ Alone, "How Great Thou Art," "Here I Am Lord," and "On Eagle's Wings" were also provided. Pallbearers were, Bill Lechtenberg, Nate Rau, Wayne Westcott, Casey Jones, Jason Appelt, Jake Adkisson, Thad Jones and Bob Keim. Honorary bearers were, all of LouAnn's Nieces, Nephews, and other family members. Burial followed at the Ainsworth Cemetery under the direction of Hoch Funeral Home of Ainsworth. In lieu of flowers/memorials were suggested to the family for a future scholarship for a student majoring in Education.

The family of Mrs. Louise Ann (Weber) "LouAnn" Williams created this Life Tributes page to make it easy to share your memories.

Louise Ann &quot;LouAnn&quot; (Weber) Williams was born at home on May...