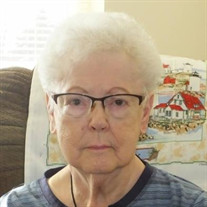 Louisa Ellen (Williams) was born to Marion and Viola (Foster) Williams on December 7, 1941 in Pittsburg, Oklahoma. The family later moved to Rulo, Nebraska where she grew up. She went to high school in Reserve, Kansas. In 1958, she became a mother at a young age and placed him for adoption with family members to be raised in a loving home. In 1961, she met the love of her life Glen Weyer in Falls City, Nebraska when he was there working on road construction. She often said if someone had told her the day she met him that they would marry, she’d have said they were crazy. The first time they met he came into the café she was waitressing at; right off his job, dirty and oily. He must have cleaned up well though because once he asked her out they were together the rest of their lives. They were married on April 25, 1962 at the Methodist Church in Falls City. After marriage they moved to Ainsworth, Nebraska to the Weyer farm where they spent the rest of their lives together until Glen’s passing on November 24, 2005. They were blessed with two children, Glen II and Deanna. Ellen continued to live on the farm until moving to Cottonwood Villa in Ainsworth in December of 2018. Ellen’s favorite pastimes were going to the casino, playing cards and spending time with her cherished family. She was a beloved wife, mother, grandmother and sister. In August 2021 she moved to Parkside Manor in Stuart after suffering a decline in her health. She passed away on October 2, 2021 with her daughter Deanna and sister Joyce at her side. She was preceded in death by her father, Marion Williams; mother, Viola Williams McWain; stepfather, Virgil McWain; sisters, Mary Lee in infancy and Nancy Peppie; brothers, Marvin (Butch) Williams and Charles McWain; in-laws, Edwin and Montana Weyer;, brothers-in-law, Dean Weyer and Keith Weyer; sisters-in-law, Muriel Weyer, Frances Craig, Dorris Davis and Shirley Egan; grandchildren, Matt Smith and Adam Smith. Survivors include: daughter, Deanna (Mike) Kreitman of Bassett, NE; sons, Glen Weyer of Cambodia and Gene Smith of Seward, NE; grandchildren, Marty Kreitman of Wayne, NE, Mark Weyer of Arizona, Jamie Smith Warner of Lincoln, NE and Randy Smith of Lincoln, NE; four great-grandchildren; a great-great-granddaughter; siblings, Joyce (Ken) Taylor of Colorado Springs, CO, Linda (Tom) Eickhoff of MO & TX, Larry (Trish) McWain of AZ; sister-in-law, Diana McWain of Hebron, NE; brother-in-law, Robert Peppie of Gresham, NE; as well as nieces, nephews and her beloved Chihuahua-“Tommy.” A Graveside Service was held on Thursday, October 14, 2021 at 10:30 AM in the Ainsworth Cemetery with Pastor Martin Leeper officiating. The CD Song Selections played were, “Amazing Grace” & “Till I See You Again” by Carrie Underwood. Poems, “Roses for Mother” by Sandy Lynam Clough was read by daughter, Deanna Kreitman and “Story of Two Different Sisters” was read by Ellen’s sister, Joyce Taylor. Marty Kreitman was an Honorary Urn Bearer. Memorials have been suggested to the family for future designation.

Louisa Ellen (Williams) was born to Marion and Viola (Foster) Williams on December 7, 1941 in Pittsburg, Oklahoma. The family later moved to Rulo, Nebraska where she grew up. She went to high school in Reserve, Kansas. In 1958, she became... View Obituary & Service Information

The family of Louisa "Ellen" (Williams) Weyer created this Life Tributes page to make it easy to share your memories.

Louisa Ellen (Williams) was born to Marion and Viola (Foster)...