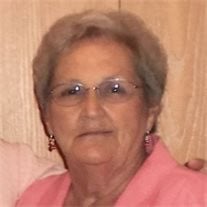 Loretta "Bubs" (Gorball) Coleman was born on August 24, 1934 in Rose, Nebraska to Hugh and Lena "Pearl" (Haszard) Gorball. She grew up near Rose on her family's ranch. She attended her early school years in Rose, and attended Rock County High School in Bassett, Nebraska where she graduated in 1952. She married the love of her life, Bryce Coleman on October 29, 1953 and they made their home in Bassett. To this union four children were born: Dave, Dougie, Bryan, and Cheri. Through the years, Bubs worked at Knutson's Drug Store, Neal's Variety Store, the Bassett Livestock Auction, and Coleman Irrigation. She was a lifetime member of the American Legion Auxiliary and a past member of St. Peter Lutheran Church Ladies' Aid. Spending time with her family was the greatest joy of her life. Going on family trips, family celebrations, holidays, or just visiting with family was what she loved. Many of her most treasured times were being with her grandchildren and great grandchildren whom she loved with all her heart. Bubs and Bryce also enjoyed many lifelong friendships and had very precious memories with their friends. She was preceded in death by her parents, her spouse Bryce, and her son Dougie. Bubs is survived by her children, Dave (Cheri) Coleman of Colorado Springs, Colorado, Bryan (Bobbi) Coleman of Bassett, and Cheri (Steve) Heimann of Norfolk; her grandchildren, Heather (Sean) Hennings, Joni Coleman, Kylie (Matt) Joyce, Bryce (Daile) Coleman, Nikki (Dustin) Nagle, Tyler Coleman, Andrea (Kyle) Fritz, and Jessica (Kyle) Maguire; her great-grandchildren, Peyton, Chase, Dylan, Ava, Addie, Claire, Zoey, Case, Brooks, Joslyn, Greyson, and Jacob; and two nephews, Jim (Elizabeth) Coleman and family, and Jeff (Kris) Coleman and family. Funeral Services were held on Wednesday, January 24, 2018 at St. Peter Lutheran Church in Bassett with Nancy Moore PMA officiating. Music was provided by Evelyn Armstrong playing the congregational hymns of "In the Garden" and "Amazing Grace." The CD Selection of "How Great Thou Art" by Carrie Underwood was also played. Casketbearers and Honorary Casketbearers were Bubs' grandchildren and their spouses, along with her beloved great-grandchildren. A poem was read by Jeff Coleman. Burial followed at the Bassett Memorial Park Cemetery. Memorials were suggested to the Sandhills Cancer Fund Inc. or to St. Peter Lutheran Church. Hoch Funeral Home of Bassett was in charge of the arrangements.

Loretta "Bubs" (Gorball) Coleman was born on August 24, 1934 in Rose, Nebraska to Hugh and Lena "Pearl" (Haszard) Gorball. She grew up near Rose on her family's ranch. She attended her early school years in Rose, and attended Rock County High... View Obituary & Service Information

The family of Mrs. Loretta J. "Bubs" Coleman created this Life Tributes page to make it easy to share your memories.