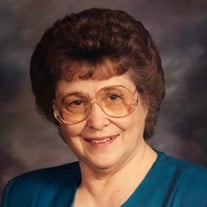 Lola Irene (Lotspeich) Rap Nelsen, aged 79, of Onalaska, Texas and Ainsworth, Nebraska, passed away at her home in Onalaska, Texas in the arms of her husband, Ronald Nelsen, on Sunday the 15th of September, 2019. Lola was born in Stuart, Nebraska on the 28th of June, 1940, to Albert Merritt Lotspeich and Anna Lois (Boller) Lotspeich. Lola grew up on a cattle ranch with her parents, older brother Duane and younger sister Elaine in the Nebraska Sandhills near Ainsworth, Nebraska. At the age of 8 years, Lola accepted Jesus Christ as her Lord and Savior on an Easter Sunday. She devoted her life to serving God, and sharing God’s love with whomever she came in contact, she did so faithfully for the rest of her life. She met her childhood sweetheart, Larry Wesley Rap, at a church youth camp when she was 15 years old. The two married on 14th of June, 1960 in Ainsworth, Nebraska. Lola worked as a judge’s secretary at Brown County Court House, until stopping to raising her two daughters, Londa and Lynnelle. She and Larry were actively involved in music ministry and youth ministry, often taking a choir of teenagers, known as The Charioteers, on mission trips to other churches and Native American reservations. Lola also ran a ladies ministry called “Heart to Heart”, served as the church secretary and helped her husband with the bookkeeping for his construction business. In 1976, the couple moved to Colorado Springs to attend the Nazarene Bible College where they trained to be music ministers and then pastors. Lola won the prestigious speaking competition one year while a student and, along with Larry, was ordained a pastor in the Church of the Nazarene. Lola and Larry pastored at Mountain View Church of the Nazarene in Longmont, Colorado from 1981 to 1990 and then at Hannibal Church of the Nazarene from 1990 until 2000 when they returned to Ainsworth, to pastor their hometown church. They served the church faithfully until their retirement in 2001. After the death of her first husband, Lola reconnected with their long-standing family friend, Ronald Dean Nelsen, who was also a pastor. Ron’s wife, Corrine, had also passed away, and Ron and Lola found themselves falling in love. Lola and Ronald were married on October 12, 2002, and went on to pastor Nazarene churches at Livingston and Huntsville, Texas. The couple have resided in Onalaska, Texas and enjoyed nearly 17 years together. She is preceded in death by Larry Rap, her parents, grandparents, aunts and uncles, her brother, Duane Lotspeich, and her brothers-in-law, Kenneth Fling and Loren Rap. She is survived by: her husband, Ronald Nelsen; her daughter and son-in-law, Londa and Hal Paul of Nampa, Idaho; her daughter Lynnelle Cairns of Nambucca, Australia; her grandchildren Joshua Paul and wife Soo Choi, Catherine Cairns and Carley Cairns; her sister, Elaine Fling; her step-children Ronda Kuhr and husband Doyle Hebing, Darold Nelsen, Clyde Charles Nelsen, Audrey Rhodes and husband Robin Rhodes, Becka Cooper and husband Wes Cooper; her step-grand-children, Brianna Winters, Lauryn and Kenzie Anderson, many cousins, nieces, nephews, in-laws and a multitude of friends. She will be remembered for her kind-heartedness, encouragement, cheerfulness and desire to serve God and others. Memorial Services were held at the Church of the Nazarene in Ainsworth, Nebraska with Donnie Painter and Pastor Russell Thayer officiating at the service. Music was provided by Nancy Campbell. Rodney and Tonya Luther and Vail Boller singing the selection of “He Paid A Debt He Did Not Owe,” “Jewel,” “I Want To Stroll Over Heaven With You,” and “I Believe.” The congregational hymn was “It Is Well With My Soul” led by Marcia Painter. Preceding the memorial service, a private family memorial graveside was held at the Ainsworth Cemetery on October 4, 2019. In lieu of flowers memorials have been suggested to the family for a future designation. Hoch Funeral Home assisted with the arrangements. To leave an online condolence visit www.hochfuneralhome.com.

Lola Irene (Lotspeich) Rap Nelsen, aged 79, of Onalaska, Texas and Ainsworth, Nebraska, passed away at her home in Onalaska, Texas in the arms of her husband, Ronald Nelsen, on Sunday the 15th of September, 2019. Lola was born in Stuart, Nebraska... View Obituary & Service Information

The family of Mrs. Lola I. Rap-Nelsen created this Life Tributes page to make it easy to share your memories.