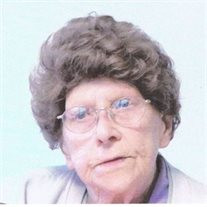 Lois Alberta Bejot was born June 29, 1923 on the home place on Buffalo Flats near Ainsworth, Nebraska to Amile and Alma (Allen) Bejot. She was the youngest of three children. She attended School District #17. Lois started kindergarten in the new brick school house at age 4 and spent most of her time sitting on the teacher's lap. Lois loved going with her father to check crops and when he went to Long Pine to work at his service station. In 1938, Lois and her mother moved to Ainsworth where Lois started high school. Life was pretty tough. She only had two dresses, one to wash and one to wear. On February 2, 1940, she married Merle Jones at the Methodist Church in O'Neill, Nebraska. To this union were born four children, David, Lila, Kenneth and Rena. They lived with Merle's parents on a farm south of Johnstown, Nebraska. Merle was drafted into the Navy in April of 1945. Lois and 3 children moved to a small house in Ainsworth. Merle was only gone for less than a month and received a medical discharge due to his vision. When Merle returned from the Navy, they moved to the Amile Bejot farm and later moved to a house on the north edge of Ainsworth, just down the hill from the sale barn. Merle worked for Harr & Son, (delivering ice) and Rogers Feed Mill, and he later managed the Sinclair Service Station in Ainsworth. After the death of Lois's father in 1952, Merle, Lois and 4 children bought her brother's farm, formerly the McMurtry place on Buffalo Flats, and began farming. They milked cows, raised chickens, grew corn and alfalfa, farming with an "M" tractor and one and two row machinery. Lois joined the AGG Extension Club and Home Circle Club. She served as District H Director of the Nebraska Council of Home Extension Clubs in the 1960's. In 1967, they bought the Butch Fernau farm and David and Carol moved on to the original farm. In 1970, Ken and Carolyn moved to the Fernau farm to join in the farming operation. Merle and Lois bought a house in Long Pine, and later they bought the Jerome V. Bejot farm and moved there. Merle passed away of cancer in July 1983. Lois continued to live on the farm until 1992 when she sold the farm to her grandson and wife, Tom and Pat Jones, and moved to Ainsworth. She joined the Rock Hounds Club and the Art Club. She enjoyed taking bus trips with her friends and helped out with the Hospital Auxiliary Thrift Shop. She was a member of the Ainsworth United Methodist Church and received an award from the United Blood Services for donating blood. Later she moved to Park Homes, and in August 2006 she entered the Ainsworth Care Center where she resided until her death on April 6, 2015. Lois will be remembered by her family and friends for her wittiness, her cute "little ditties" she was always quoting, and her feisty way. She loved her family and was a very caring friend, and she will be dearly missed by the residents and caregivers at the Ainsworth Care Center. She was preceded in death by her parents; husband, Merle; sons, David and Kenneth; brother, Jerome "Buck" Bejot, and sister, Bernice Jones. Lois is survived by her daughters, Lila Jones and Rena Cathey both of Amerillo, Texas. Daughters-in-law, Carol and Carolyn Jones both of Ainsworth; seven grandchildren, 13 great- grandchildren and 3 great-great grandchildren as well as many cousins, nieces and nephews. Funeral Services were held on April 11, 2015 at the United Methodist Church in Ainsworth, Nebraska with Pastor Eldon Davis officiating the service. Special CD selections provided were, "In The Garden" by Jim Reeves and "The Old Rugged Cross" by Tennessee Ernie Ford. Pallbearers were, Pallbearers were grandsons, Jim Jones, Tom Jones, Shane Jones, Darian Jones, Josh Cathey and David Kackmeister (husband of her granddaughter, Karen). Interment was held at the Ainsworth Cemetery. In lieu of flowers, memorials were suggested to the family in her name for a future designation. Hoch Funeral Home was in charge of the arrangements.

Lois Alberta Bejot was born June 29, 1923 on the home place on Buffalo Flats near Ainsworth, Nebraska to Amile and Alma (Allen) Bejot. She was the youngest of three children. She attended School District #17. Lois started kindergarten in the... View Obituary & Service Information

The family of Mrs. Lois A. Jones created this Life Tributes page to make it easy to share your memories.