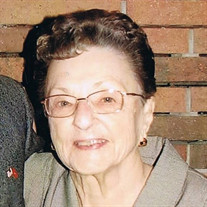 Lois N. (Krause) Bennett was born on January 20, 1920, near Mason City, Nebraska, to Henry and Effie (Tykwart) Krause. She was the second child of four. Lois grew up on the family farm two-and-a-half miles east of Ansley, Nebraska. She attended school in Ansley and graduated from Ansley High School in 1938. After graduating from high school, Lois attended Hastings Business College. After completing business school, she worked for a short time for the county in Broken Bow, Nebraska. Following that, Lois moved to Bassett, Nebraska, where she began working for the Commercial Bank. It was during this time that she met her future husband, Dallas R. Bennett. While Dallas was home on leave from the United States Marine Corps, Lois and Dallas were married in Elk Point, South Dakota, on February 17, 1945. Following Dallas’s discharge from the Marines, they spent sixty-seven years in Bassett. Lois remained in her home following Dallas’s death in June of 2012. In February of 2018, Lois became a resident of the Rock County Long Term Care. During her life, Lois was member of the United Methodist Church, the United Methodist Women Organization, Nite Owls Extension Club, Eastern Star as a Worthy Matron, Sandhills Quilt Guild, as well as a 4-H leader for many years. Lois enjoyed hobbies that included golfing, bowling, sewing, and several kinds of needlework. Lois made most of her own clothes as well as her daughters’ clothes. Lois was a stay-at-home mother until she went to work as a secretary at the Rock County Hospital. While employed by the hospital, she completed a correspondence course to become certified to work as a Medical Records Transcriber for the hospital doctors. She did this until she retired in 1991. Lois passed away on November 4, 2018, at the Rock County Long Term Care. She was preceded in death by her parents, her sister Grace, her brother Gene and his wife Shirley, her husband Dallas, her brothers-in-law Clarence and his wife Gladys, Howard and his wife Mary, and Wayne and his wife Mary. Lois is survived by her brother Wayne and his wife Charlene, her daughters: Faye Saar and husband Gary, of Bassett, Jaci Harmon and husband Jim of Atkinson; her four grandchildren: Jayme Hansen and husband Steve, Jered Saar and wife Shelly, Jill Paopao and husband Uati, and Jesse Harmon; and her four great-grandchildren: Jenna Hansen, Jakob Shaul, Jace and Jett Paopao. Funeral services were held on November 8, 2018 at the United Methodist Church in Bassett, Nebraska. Pastor Dennis Quigley officiated the service. JoAnn Swanson provided the music and Marilyn Stewart led the congregational hymns of “Hymn of Promise” and “I Was There To Hear Your Borning Cry.” Casket bearers were Uati Paopao, Gary Saar, Jim Harmon, Jered Saar, and Steve Hansen. Honorary bearers were all of Lois’s other family members. Burial followed at the Bassett Memorial Park Cemetery in Bassett under the direction of Hoch Funeral Home of Bassett. In lieu of flowers, memorials were suggested to the Rock County Library, the Bassett United Methodist Church, or to the Rock County Hospital Long Term Care.

Lois N. (Krause) Bennett was born on January 20, 1920, near Mason City, Nebraska, to Henry and Effie (Tykwart) Krause. She was the second child of four. Lois grew up on the family farm two-and-a-half miles east of Ansley, Nebraska. She attended... View Obituary & Service Information

The family of Mrs. Lois N. Bennett created this Life Tributes page to make it easy to share your memories.