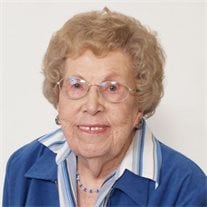 Lillian (Rohwer) Rescineto passed away on November 10, 2012 at the age of 100 years and 29 days. Lillian was born on October 12, 1912 at home on Main Street in Ainsworth, Nebraska to Hans and Nora (Wulf) Rohwer. She grew up in Ainsworth where she witnessed the first blacktop roads and "modern" plumbing. The family moved to California in 1924. They lived in several cities but mostly in the bay area. Lillian attended school in Oakland, California. While living in California, they saw Charles Lindbergh and "The Spirit of Saint Louis." It was a thrill. In 1929, the family moved back to Ainsworth. Lillian graduated from Ainsworth High School in 1930. She lived through the depression which made for many stories and a frugal life style. She attended Wayne State College for two years, then she taught country school 20 miles south of Johnstown on the Calamus River. After three years of teaching country school, she attended The University of Nebraska at Lincoln where she was a member of Chi Omega Sorority. She graduated in 1937 with a Bachelor of Science Degree in Home Economics. She used her degree working for Commonwealth Edison demonstrating new electric stoves and showing homeowners how to improve their lighting in the Chicago area. Where she lived on Lakeshore Drive and danced to Eddie Howard, Duke Ellington and Tommy Dorsey. She also worked for Ovaltine as a detail person, telling doctors the good qualities of Ovaltine. Her job required her to travel, she spent time in Boston, Philadelphia, New York and Indianapolis. In 1944, she moved back to California. In 1945, Lillian was in the San Francisco Opera House when the 50 allied nations signed the charter to the newly formed United Nations. Two years later she met her future husband, Michael Rescineto. They were married February 14, 1948 in San Francisco. They moved to San Diego. To this union was born a daughter, Nora. Lillian taught first grade in the San Diego, California school system until 1962 when Lillian and Nora moved back to Ainsworth. She worked in the First National Bank of Ainsworth with her father, Hans and her brother Rollin Rohwer until retirement. Lillian was an 81 year member of the P.E.O. Sisterhood, Chapter BM of Ainsworth. She was also a lifetime member of the Congregational Church of Ainsworth. She was active with the Ladies Fellowship. She was also an active member of the KBR&H Home Economists. She was a Cornhusker for life and loved the Nebraska football games. She was well traveled and lived many exciting tales but Ainsworth was always home. Her final years were spent living in Overland Park, Kansas with her daughter Nora and son-in-law Lee. The love of her life was her grandson, Charles Sullens and his two boys, Luke and Hunter. She was preceded in death by her parents, Hans and Nora Rohwer, brother and sister-in-law, Rollin and Colleen Rohwer. Lillian is survived by her daughter and son-in-law Nora and Lee Bertrand, grandson Charles Sullens, great-grandsons, Luke and Hunter. Her nieces and nephews, Robin and Bob Franson, Jo and Bob Mayber, Chris and Robin Rohwer, George and Nancy Rohwer and great nieces, Molly Mayber, Lauren and Kelsey Rohwer. Funeral services were held on Friday, November 16, 2012 at the Congregational United Church of Christ. Officiating the service was Pastor Neva Murphy. A memorial service by the members of Chapter BM, P.E.O. Sisterhood was part of the service. Pallbearers were Lee Bertrand, Charles Sullens, Chris Rohwer, George Rohwer, Bob Mayber and Bob Franson. Burial was held at the Ainsworth Cemetery in the family plot. Hoch Funeral Home of Ainsworth was in charge of the arrangements. Memorials may be made to the Congregational United Church of Christ or to Chapter B.M. P.E.O. Sisterhood.

Lillian (Rohwer) Rescineto passed away on November 10, 2012 at the age of 100 years and 29 days. Lillian was born on October 12, 1912 at home on Main Street in Ainsworth, Nebraska to Hans and Nora (Wulf) Rohwer. She grew up in Ainsworth where... View Obituary & Service Information

The family of Lillian M. (Rohwer) Rescineto created this Life Tributes page to make it easy to share your memories.