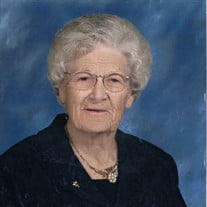 Lila Mae Miller, only child of Lee and Martha Ann (Lamphere) Miller, was born February 27, 1914, near Vernon, Colorado on her parent’s farm. She passed away April 18, 2019 at the Rock County Hospital Long Term Care in Bassett, Nebraska. Before reaching the age of two years, her mother was taken from the home to a hospital in Pueblo, Colorado, where she passed away a few years later, a victim of Epilepsy. Mae was reared in the home of her grandparents, James and Clara Miller and family. She attended grade school there through the eighth grade. Mae then went to live with relatives in Wyoming. After completing the sophomore year, she quit school and went to work for another family in Laramie for a few years. Mae then moved back to McCook with her grandmother and had many various jobs. About a year later, she went to help other relatives near Callaway, Nebraska. While living there she met Dick Mizner and on November 9, 1938 they were married in McCook, Nebraska. In December of 1941, they bought a ranch 28 ½ miles south of Bassett, Nebraska, near Rose in Rock County. Her husband Dick passed away January 22, 1949 form cancer and Mae stayed on the ranch with her dad to care for the livestock. Mae was called to McCook in 1952 to care for her grandmother until she passed away in July of 1957. Mae’s health was failing so she remained in McCook under the doctor’s care. In 1964 she came back to the ranch to stay to help care for her dad who passed away in 1965. Later in life she left the ranch and moved to Bassett where she remained until her death. Mae was preceded in death by her parents, her grandparents, and is survived by numerous nieces, nephews and cousins. Funeral Services were held on April 23, 2019 at the United Methodist Church in Bassett, Nebraska. Pastor Michelle Byerly officiated the service. Music was provided by Carolyn Clark. Congregational selection was, “God Be With You Till We Meet Again.” Pallbearers were, Hershel Wilson, Dale Caskey, Jimm Johnson, Jim Craven, Mike Kuchera, and Terry Kuchera. Burial followed at the Ainsworth Cemetery, in Ainsworth, Nebraska. Hoch Funeral Home was in charge of the arrangements. In lieu of flowers, memorials are suggested to the Rock County Hospital Long Term Care in Mae's name.

Lila Mae Miller, only child of Lee and Martha Ann (Lamphere) Miller, was born February 27, 1914, near Vernon, Colorado on her parent&#8217;s farm. She passed away April 18, 2019 at the Rock County Hospital Long Term Care in Bassett, Nebraska. Before... View Obituary & Service Information

The family of Mrs. Lila "Mae" Mizner created this Life Tributes page to make it easy to share your memories.