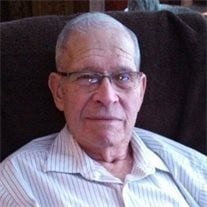 Lester Marion Sybrant was born October 13, 1926 to Blaine and Lucy (Clark) Sybrant at Long Pine, Nebraska. He was raised on the original Sybrant homestead at Sybrant, Nebraska with his older siblings, twins Ray and Ruby, Mable and Frank. In 1931 when he was 5½ years old, his father passed away and life became very difficult as his mother struggled to provide for them. He attended the Sybrant Grade School, and high school in Crookston, Valentine, and Rock County, and then went to work in the sugar beet factory in western Nebraska and as a ranch hand in Nebraska and Montana. He traveled and had great adventures with his nephew and constant companion, Orville Schubert. The chronicles of Lester and Orville entertained the family for years to come. Lester was drafted into the army when he was 18. Upon finishing basic training in Fort Riley, Kansas, he and his buddies set out on a very solemn trip to Omaha, Nebraska where they were to be sent to the west coast and on to Japan to fight in the war. Arriving in Omaha, they were amazed at the people thronging the streets. When they got off the bus in their army uniforms, everyone started hugging them. Then they were told the unbelievable news, the Japanese had surrendered! The war was over!!! Lester celebrated his 19th birthday on a ship headed to Japan, only as an occupying force. One year later, he again had his birthday on the ship heading home. On June 11, 1949, Lester married Margaret Swinney. Because of his love for Montana, they traveled there on their honeymoon and he got a ranch job near Absarokee. When Margaret became homesick, they put the mattress on top of the car and returned to Bassett. Lester worked as a blacksmith for four years, spent five years on a ranch north of Burwell and 17 years at the Sybrant home. During that time he began working for Sandhill Implement then later was the manager of Valmont Sandhills, the center pivot dealership. He also started and ran Northern Plains Supply until retirement in 1992. Lester and Margaret bought the old Kaufman house and moved to Bassett in 1974 and it became the gathering place for countless wonderful celebrations for family and friends for 41 years. Lester loved shopping for new vehicles, traveling in his fifth wheel camper, going to the senior center, playing pool and reading his Bible. Lester passed away February 21, 2015 at the Rock County Hospital at the age of 88. He was preceded in death by his parents, brothers and sisters and his beloved wife "Margie." Lester is survived by three children, Judith and husband Chuck Lemp of Long Pine, Kristie and husband James Keller of Newport, and Daniel Blaine Sybrant and wife Deb of Corvallis, MT; his grandchildren, Brittany DeVall Heyden and husband Clifford of Bassett, Brandon DeVall and wife Emily of Kearney, NE, Daniel Keller and wife Shannon of Lexington, NE, David Keller of Ft. Collins, CO, Dane Sybrant and wife Brooke of Portland, OR, Darred Sybrant and wife April of Corvallis, and Dalton Sybrant and wife McKynzie of Ft. Collins; nine great-grand children, Bailey DeVall, Mia DeVall Heyden, Jersey and Berkley DeVall, Landen and Madison Keller, Dominick Matt Sybrant, Mako Sybrant and Sovereign Sybrant. Memorial services were held on Saturday, February 28, 2015 at the United Methodist Church in Bassett, Nebraska. Officiating the service were Pastor Rod Heilbrun and Pastor Dennis Quigley. Music was provided by JoAnn Swanson. The Singin' Seniors provided the selections of "Just Have A Little Talk With Jesus" and "Family Of God". Personal Reflections were given by grandson, Brandon DeVall. Honorary Bearers were Daniel Keller, David Keller, Brandon DeVall, Clifford Heyden, Dane Sybrant, Darred Sybrant and Dalton Sybrant. Military honors were presented by the Bassett American Legion Post #123. Arrangements were handled by Hoch Funeral Home of Bassett. Memorials were suggested to the Rock County Senior Center, to the Rock County Hospital or to Long Term Care Facility in his name.

Lester Marion Sybrant was born October 13, 1926 to Blaine and Lucy (Clark) Sybrant at Long Pine, Nebraska. He was raised on the original Sybrant homestead at Sybrant, Nebraska with his older siblings, twins Ray and Ruby, Mable and Frank. In... View Obituary & Service Information

The family of Lester M. Sybrant created this Life Tributes page to make it easy to share your memories.