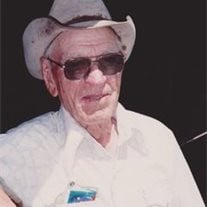 Leslie W. Graff was born on April 6, 1914 to Frank and Emma (Thompson) Graff at Johnstown Nebraska. He grew up on the family ranch on Plum Creek north of Johnstown. The ranch was homesteaded in 1896 and has been in the Graff family for over 100 years. Leslie attended rural school district #32 north of Johnstown through eighth grade and high school in Johnstown. He rode a horse three miles every morning to catch the school bus to attend high school in Johnstown. Leslie and his father raised draft horses as well as cattle. They broke, trained and sold draft teams. They used horses to put up hay and feed livestock until 1950, when the first tractor was purchased. Leslie broke many horses for other ranchers at $10 apiece. All the ranch and cattle work was always done the old cowboy way- horseback. Leslie married the love of his life, Betty Jean Anderson, on June 12, 1940. They had 57+ wonderful years together. To this union four children were born: Kay, Stan, Vickie, and Bill. Leslie was known for his integrity, strong religious beliefs, and many talents. He played the violin and the saxophone, loved to dance, had a beautiful singing voice that was shared with others at church and funerals. He raised thousands of fryer chickens, was an avid gardener, and quite an accomplished carpenter. Leslie was very active in the community. He served on the Brown County Hospital Board for 8 years. He was a member of the Johnstown Methodist Church. He was a member of the Brown County Ag. Society and served on the Board of directors as treasure for many years. He really enjoyed the Brown County Fair and Rodeo which he attended faithfully. He only missed the fair and rodeo 2 years of his life. For several years there was a four generation Graff Family riding in the Labor Day Parade. In 2006 he was inducted into the Sandhills Cowboy Hall of Fame. He moved to Ansley, Nebraska in 2011 to be near his daughter Vickie, living in his own apartment until 2016 when he moved to Rose Lane Home in Loup City Nebraska, where he passed away on February 10, 2017 at the age of 102+ years. He is survived by his daughter, Vickie (Randy) Johnson of Ansley, son, Bill Graff of Ainsworth; son-in-law, Don (Trudy)Honaker of Pardeeville, Wisconsin; daughter-in-law, Sheryl Graff, Ainsworth, Nebraska; sister-in-law, Annabelle Anderson of Ness City, Kansas; Seven grandchildren, 14 great-grandchildren, and three great-great-grand children, nieces, nephews, cousins, and a host of friends. Leslie was preceded in death by his wife, Betty Graff, daughter Kay Honaker, son Stanley Graff, parents Frank and Emma Graff, brother, Kenneth Graff and infant grandson Chad Benze. Funeral services were held on February 17, 2017, at the Assembly of God Church in Ainsworth with Pastor Gary Graesser officiating the service. Music was provided by Myra Williams, with congregational selections of "Old Rugged Cross" and "Just A Closer Walk With Thee" being sung. A CD selection of "Grandpa" by The Judds was also provided. Pallbearers were, Todd Graff, Terry Graff, Joshua Graff, Brady Graff, Dylan Graff, Todd Walzak, Patrick Peitz, Rob Heiman, Matt Davis, and Korbin Peitz. Interment followed at the Ainsworth Cemetery under the direction of Hoch Funeral Home of Ainsworth. In lieu of flowers, memorials were suggested to the Brown County Ag Society.

Leslie W. Graff was born on April 6, 1914 to Frank and Emma (Thompson) Graff at Johnstown Nebraska. He grew up on the family ranch on Plum Creek north of Johnstown. The ranch was homesteaded in 1896 and has been in the Graff family for over... View Obituary & Service Information

The family of Mr. Leslie W. "Les" Graff created this Life Tributes page to make it easy to share your memories.