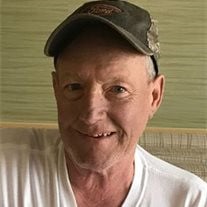 Leslie Dean Farris passed away on February 20, 2017, in Omaha, Nebraska. Les was born on October 10, 1951 in Ainsworth, Nebraska, to Birdeen (Crooker) and Leslie M. Farris. He grew up in South Dakota and then Ainsworth, surrounded by a loving close-knit extended family. He graduated from Ainsworth High School in 1969 and subsequently attended Parks School of Business in Denver, Colorado. In 1970, Les joined the United States Army and was stationed in Louisiana. On April 16, 1971, while stationed in Louisiana, Les married Francis Spearman. To this union were born two children, Lezlie Ann and Joshua Kirk. Les and Fran divorced after 14 years. Les and his father owned Farris Trucking Company through 1980 and he subsequently drove truck for Ainsworth Feed Yards. Les worked for the State of Nebraska Department of Roads from 1986 to 2005. Les also co-owned the Longhorn Bar in Ainsworth until selling it in 2012. Most recently, Les drove truck for Goochey Farms. Les was loved by all, especially by his children and his five granddaughters, who were his pride and joy. He had just met his only grandson born hours before his passing. Les loved the Ainsworth community and the multitude of friends he had there. His greatest joy came from simply "the company of others," from visiting over coffee to conversations at the grocery store. Les is survived by his two children: Lezlie (Frank) Chimienti, of Rockville Centre, New York and Josh (Ashley) Farris of Omaha; six granddaughters, Anna, Madeline, Grace, Harper and Marah; and one grandson, Brooks; uncle, Steve (Jan) Crooker of Oakland, Arkansas, and aunts, Joanne (Crooker) Hughes of Winner, South Dakota, and Carolyn (Farris) Musilek of Rapid City, South Dakota, and numerous loving cousins. Les was preceded in death by his parents, his step-mother Fern (Smith) Farris and his brother, Dennis Farris. Memorial services were held on February 27, 2017 at the United Methodist Church in Ainsworth, Nebraska with Pastor David Randall officiating the service. Music was provided by Linn Baxter. Special music selections of "Go Rest High On That Mountain," "I Can Only Imagine," and "Amazing Grace, My Chains are Gone" were provided by Billy Baxter and Nadine Prososki. Inurnment followed at the Ainsworth Cemetery with Military Honors being provided by the Ainsworth American Legion Post #79. Hoch Funeral Home was in charge of the arrangements. In lieu of flowers, memorials were suggested to the family for a future designation.

Leslie Dean Farris passed away on February 20, 2017, in Omaha, Nebraska. Les was born on October 10, 1951 in Ainsworth, Nebraska, to Birdeen (Crooker) and Leslie M. Farris. He grew up in South Dakota and then Ainsworth, surrounded by a loving... View Obituary & Service Information

The family of Mr. Leslie Dean "Les" Farris, Jr. created this Life Tributes page to make it easy to share your memories.