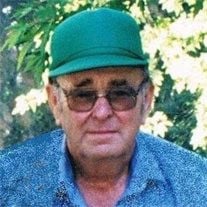 Leslie Martin Farris was born November 1, 1928 near Long Pine, Nebraska to Martin and Mattie (Hopkins) Farris. He passed away on March 3, 2015 at the Avera St. Anthony's Hospital in O'Neill, Nebraska at the age of 86 years. Leslie grew up in the Nebraska Sandhills until he moved to a ranch near Wewela, South Dakota. He finished the 8th grade there and never went on to high school. Leslie worked on ranches and farms near Ainsworth and Bassett, Nebraska in his early twenties. He then met Birdeen Selma Crooker. They were married on January 1, 1951. Leslie's father, Martin, bought a farm near Colome, South Dakota and a farm near Wewela. Leslie and Birdeen had two children, Leslie Dean Farris and Dennis LeRoy Farris. Martin and Leslie farmed and ranched together for the better part of the 1950's. In 1959 the family moved to Ainsworth and Leslie took a job driving a gas truck for his father-in-law, Joe Crooker. Throughout the 1960's he drove a gas truck and also drove a semi-truck doing local hauling. Leslie and Birdeen built a house on the west side of Ainsworth that is still standing today. From 1973 to 1978, they owned and operated the Remington Arms Motel in Ainsworth. Leslie owned three semi-trucks that were driven by several people around Ainsworth including his sons. After the motel was sold, he and Les Jr. started a gravel truck business. Tragedy struck in February of 1980 when their son, Dennis, was killed in a car accident outside of Chadron, Nebraska at the young age of 26. On November 7, 1980, Leslie married Ellen Fern Smith. He and Fern rented a house in Ainsworth before moving to O'Neill where they bought a liquor store on Highway 20 and ran that for three years. In 1983, they sold the liquor store and moved three miles west of O'Neill. Les then took a position with Ag-Services. He often told stories of great friends and co-workers during his years at Ag-Services. Leslie retired from there in 2005. Leslie was preceded in death by his parents; his son, Dennis; brother, Arld and his wife, Rosie; sister, Marjorie Kinzer; a brother-in-law, Lyle Musilek; and a step-grandson, Jeremy Miller. He is survived by his wife, Fern of O'Neill; son, Leslie Jr. of Ainsworth; sister, Carolyn Musilek of Sturgis, South Dakota; brother-in-law, Russell Kinzer of Colome; two grandchildren, Joshua Kirk Farris of Omaha and Lezlie Ann Chimienti of Long Island, New York; five great-grandaughters, Anna Lucille Chimienti, Madeline Frances Chimienti, Grace Farris Chimienti, Harper Ann Farris and Marah Elizabeth Farris. He is also survived by three step-children, Patricia Nichelson and husband, Tim of Ashland, Nebraska, Deborah Laible of Orchard, Nebraska and Leon Meyers and wife, Jacque of O'Neill; along with 11 step-grandchildren and 18 step-great-grandchildren; and many nieces, nephews and other family members. Funeral Services were held on Saturday, March 7, 2015 at the United Methodist Church in Ainsworth with Pastor Eldon Davis officiating. Prelude and Postlude music was provided by Sherry Campbell. Joe McBride performed the songs, "Better Man," "When I Get Where I Am Going" and "Saginaw, Michigan" at the services. Casketbearers were: Josh Farris, Jesse Voss, Dustin Robertson, Jason Meyers, Brad Meyers and Luke Meyers. Honorary Casketbearer was Jeremy Miller. Memorials were suggested to the family for future designation. Interment was in the Ainsworth Cemetery under the direction of the Hoch Funeral Home of Ainsworth.

Leslie Martin Farris was born November 1, 1928 near Long Pine, Nebraska to Martin and Mattie (Hopkins) Farris. He passed away on March 3, 2015 at the Avera St. Anthony's Hospital in O'Neill, Nebraska at the age of 86 years. Leslie grew up... View Obituary & Service Information

The family of Mr. Leslie M. Farris created this Life Tributes page to make it easy to share your memories.