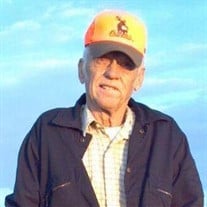 Leonard Joe Fernau was born on July 17, 1943 in Ainsworth, Nebraska to Lee and Donna (Staal) Fernau, and passed away unexpectedly June 27, 2019 on the Fernau family homestead where he was raised and spent most of his life. Leonard attended District #20 country school, graduated from Ainsworth High School in 1961 and lived in Idaho for a few years before serving in the United States Army. He was stationed in Fort Carson, Colorado as a 44C20 welder from 1965-1967. He was an exceptional welder and worked for Daniels Manufacturing off and on for many years in addition to farming and ranching. He married Cheri Smith on June 15, 1973 and to this union one son and four daughters were born. In 1982, Leonard had a tragic farm accident, but he was determined to persevere and follow his life ambitions. He took great pride in raising cattle and spent much of his life building his registered Black Angus herd. Leonard enjoyed playing pitch, reading, hunting, visits from his grandchildren, and loved watching rodeo especially the PBR and NFR. He considered deer season to be his only vacation, he was an excellent marksman and was most proud of drawing and filling a Niobrara River bull elk tag in 2013. Leonard is preceded in death by his older brother Milton, his parents, father-in-law M.L. Smith, and brothers-in-law, Larry Painter and Joe Bejot. Leonard is survived by his wife Cheri, son Lenny (Candi) Fernau of Ainsworth, and daughters Candy Fernau of Nashville, Tennessee, Julie (Jonathan) Cyriacks of Kearney, Nebraska, Lori (Chad) Rolfes of Vermillion, South Dakota and Janelle (Mark) Johnson of Kilgore, Nebraska; Six beloved grandchildren Reese, Blake and Joslyn Rolfes; Sloan, Salem and Sonny Cyriacks; Sisters, Roberta Painter of Springview, Nebraska and Shelia Bejot of Ainsworth; Mother-in-law, Fae Smith; brother-in-law, Mike (Alice) Smith of Hill City, Kansas and many nieces, nephews and other family members including Artie McDaniel of Ainsworth, a very special family friend. Leonard was a strong and courageous man. He was a tremendous inspiration to his family and friends and always had time to talk to just about anyone. He will be remembered for his determination, pranks, and doing things his way....”the only way”. Graveside services were held on July 3, 2019 at the East Woodlawn Cemetery near Johnstown, Nebraska with Pastor David Randall officiating the service. Special CD selections of “Troubadour” by George Strait and “Heading Home” by daughter, Candy Fernau were provided. Casket bearers were Lenny Fernau, Jonathan Cyriacks, Chad Rolfes, Mark Johnson, Artie McDaniel and Tommy Schumacher. Honorary bearers were Joe Giles, Ronnie Frye, Donnie Painter, Bud McBride, Dean Painter, Pat Schumacher, and his many other friends. Hoch Funeral Home of Ainsworth was in charge of the arrangements. Memorial are suggested to the Sandhills Chapter of Pheasants Forever, the East Woodlawn Cemetery of Johnstown, or to the Donor's Choice.

Leonard Joe Fernau was born on July 17, 1943 in Ainsworth, Nebraska to Lee and Donna (Staal) Fernau, and passed away unexpectedly June 27, 2019 on the Fernau family homestead where he was raised and spent most of his life. Leonard attended... View Obituary & Service Information

The family of Mr. Leonard J. Fernau created this Life Tributes page to make it easy to share your memories.