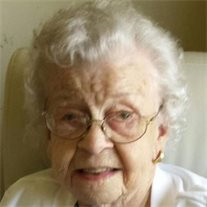 Leona Emma Klein Spann was born in Battle Creek, Nebraska on August 3, 1916, and passed away on December 22, 2015, at the age of 99 years. She was one of six children born to Leonard J. and Emma (May) Klein. Leona attended elementary school in Battle Creek, and graduated from Royal, Nebraska High School in 1934, as the family had moved to a farm near Royal. Her dad farmed, raised pigs, and operated a flour mill north of Royal. Besides the reality of living and working on a farm, Leona recounted fond memories of riding horses, ice skating, snow skiing, and wading in Verdigre Creek while growing up. Leona recalled riding the train to Rock County following high school graduation to come to work for her Grandma May who lived east of Bassett. She also worked for other neighbors, helping in the kitchen and taking care of the children. Here is where she met her husband, Mark, and they were married October 15, 1938, and settled in Bassett in a little house on the street south of the courthouse. A few years later, they bought the big house on Augusta Avenue where Leona resided until moving to the Rock County Long Term Care Center two years ago. Mark owned a construction company in Bassett, while Leona was a homemaker and mother to three children; James Frederick, David Sheldon, and Mary Ann Elizabeth. She loved to bake, and her expertise and talents expanded to her starting her own business where she baked and decorated beautiful wedding and birthday cakes, plus cinnamon rolls, pies, and decorated cookies. In later years, she worked at the Ben Franklin store and Sangers Market in Bassett until retirement.Mark and Leona loved playing cards, going to dances at Hidden Paradise, and watching sports-either their own children in Rock County events, or later, the grandkids, and on television, especially Nebraska sports. Leona also enjoyed accompanying Mark and the boys on their hunting expeditions.Leona's other interests included gardening, both vegetables and flowers, plus tending her raspberry patch. She was an excellent cook, specializing in roast beef, fried chicken, and homemade noodles and pies, cinnamon rolls, and dill pickles. Crocheting, knitting, and quilting were also favorite pastimes throughout the years, producing many beautiful items for family and friends.Leona was a member of the United Methodist Church in Bassett, plus the Methodist women's society. She also participated in the weekly Busy Fingers quilters at the church. In addition, she was a longtime member of the Rock County Historical Society and a respected resource for Rock County History. She also was a supporter of the Rock County Senior Center and took advantage of the daily meals served there plus many other activities, including another quilting group.Leona was preceded in death by her husband, Mark, son, James, parents, Leonard and Emma Klein, brothers, George, Buster, and Donald. She is survived by her children; son, David (Susan) Spann of Ainsworth, Nebraska, and daughter, Mary (Louis) Kucirek of Valley. Nebraska; grandchildren; Bryce (Nicole) Spann. Andrea (Adrian) Collins, Scott (Jana), Chris (Diane), and Matt (Martha Lee) Heyne; great-grandchildren; Julia, Jude, and Ruby Spann, Olivia Wicker and Beckett Collins, Faith, Maggie, Mia, Brooke, Lily, and Ava Heyne, Amanda and Sam Church; sisters, Ruth Simon, Sioux City, Iowa, Wilma Burch, Concord, California; sisters-in law, Maudie Patch, Albany, Oregon and Jo Spann, LaVista, Nebraska, nieces and nephews, cousins, as well as many friends.

Leona Emma Klein Spann was born in Battle Creek, Nebraska on August 3, 1916, and passed away on December 22, 2015, at the age of 99 years. She was one of six children born to Leonard J. and Emma (May) Klein. Leona attended elementary school... View Obituary & Service Information

The family of Mrs. Leona E. (Klein) Spann created this Life Tributes page to make it easy to share your memories.