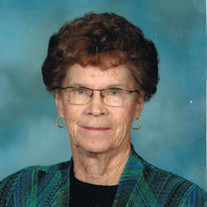 LaVerne Lois (Cameron) Iverson was born on April 22, 1927 to Albert and Marion McCall at Bassett, Nebraska. The McCall&#8217;s were ranchers. The place they had was a short distance west of Fish Lake and about the same distance south of the... View Obituary & Service Information

The family of LaVerne L. (McCall) Iverson created this Life Tributes page to make it easy to share your memories.