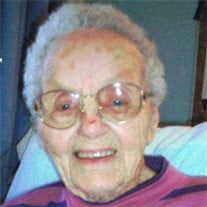 Laura Helen Lehn Cline was born August 17th, 1915 on a farm north of Ainsworth, Nebraska to Frank J. Lehn and Anna (Januschewski) Lehn. She was the oldest of seven children, with three younger brothers and three younger sisters. She helped her mother with the younger ones. Laura went to school and graduated 8th grade from what was formerly District #11 in Brown County. Laura then attended Ainsworth High School, graduating with the class of 1933. She then worked at housekeeping jobs and at the grocery store and meat market for Jake and Cecil Jansen. On September 12, 1940 she married John W. Cline. In 1943 they purchased the present ranch site. They raised two children, a son Johnny and a daughter Beverly. Laura worked on the ranch helping wherever needed. In later years she enjoyed visits from her grandchildren and great-grandchildren. Laura passed away August 19, 2013 at the Ainsworth Care Center. She was preceded in death by her husband, John; parents, Frank and Anna Lehn; her three bothers, Ralph, Donald and John Lehn; and one sister, Edna Sanko. Laura is survived by her son, Johnny D. Cline and wife Deanna of Valentine, Nebraska; daughter, Beverly Fenner and husband Eric of Gothenberg, Nebraska; 5 grandchildren and 6 great-grandchildren; sisters, Wilma Williams of Buena Vista, Colorado, Marion Rumsey and husband Bob of Idaho; sister-in-law, Twilla Lehn of Ainsworth; along with nieces and nephews. Funeral Services were held on August 24, 2013 at Hoch Funeral Home in Ainsworth, Nebraska with Pastor Sunny Ridings officiating at the service. Special CD selections of "Precious Lord, Take My Hand," "Precious Memories," and "Peace In The Valley" were provided. Pallbearers were: Seth Fenner, RJ Cline, Mike Hamilton, Travis Jackson and Mike Tidyman. Honorary Bearers were: All of Laura's Friends and Family. Burial was held at the Ainsworth Cemetery. Memorials were to be directed to the Thedford United Church of Christ-Heating/Air Conditioner Project or to the Donor's Choice.

The family of Mrs. Laura Helen (Lehn) Cline created this Life Tributes page to make it easy to share your memories.