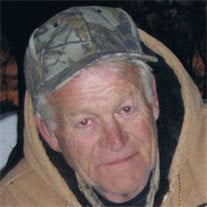 Larry Eugene Walton was born on June 24, 1944 to David and Esther Walton and passed away at his home in Ainsworth, Nebraska on August 29, 2014. He was the 5th of 8 brothers and sisters, Don, Dorothy, Lea Anne, Gary, Rick, Mag and Doug. He grew up in Ainsworth attending Ainsworth High School. Following high school Larry joined the U.S. Navy. After being discharged from the Navy, he began his long lifetime career as a meat cutter. Starting as a traveling meet cutter in South Dakota he settled back in Ainsworth working for what would become H & R Foods. He retired from this business in 2002. In 1968, Larry married Judy Schmid and were blessed with three children, Kandi, David and Michelle, whom gave them four grandchildren; Brandon, Seth, Jacce and Holldyn. They were the highlights of his life. Larry's hobbies included hunting, fishing, and camping. He loved tinkering in his garage on whatever he could find to fix, (whether he needed to use it or not.) He might be most known for his and Judy's beautiful yard and landscaping. He was active with the church duties including cleaning, handyman and church elder, which he loved very much and was impossible to get him away from. Larry delivered meals for the Senior Citizens Center several days a week which gave him the opportunity to visit with people around town. He was a U.S. Navy Veteran, member of the Ainsworth Elks Lodge #1790 and a 30 year member of the Ainsworth Fire Department. Larry liked everyone he knew and met. He will be missed by all his family and friends. He is survived by his wife Judy Walton of Ainsworth; son, David Walton of Ainsworth, daughters, Michelle Beck and husband Tonny of Ainsworth, Kandie Flynn Ruskamp and husband Mark of Omaha, Nebraska, 4 grandsons, Brandon Flynn, Seth Flynn, Jacee Beck and Holldyn Beck; brothers, Rich Walton and wife Dee of Lexington, Nebrska, Doug Walton of Ainsworth; sisters, Dorothy Mead of Laughlin, Nevada, and Margaret Kay Switzer of Columbia, South Carolina, along with nieces and nephews Funeral services were held on September 3, 2014 at the Zion Lutheran Church in Ainsworth, Nebraska with Pastor Georg Williams officiating the service. Music was provided by Georgia Williams, with a special CD selection of "This Face" by Willie Nelson. Pallbearers were, Ray Hayes, Wes Luther, Vail Boller, Justin Ludemann, Lenny Fernau, and Roger McCoy. Burial was held at the Lutheran Cemetery under the direction of Hoch Funeral Home of Ainsworth, Nebraska. Memorials were directed to the Zion Lutheran Church, the Brown County Hospital Auxiliary, or to the Ainsworth Senior Citizens Center.

Larry Eugene Walton was born on June 24, 1944 to David and Esther Walton and passed away at his home in Ainsworth, Nebraska on August 29, 2014. He was the 5th of 8 brothers and sisters, Don, Dorothy, Lea Anne, Gary, Rick, Mag and Doug. He grew... View Obituary & Service Information

The family of Mr. Larry E. Walton created this Life Tributes page to make it easy to share your memories.