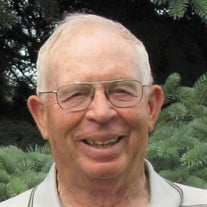 Larry William Schelm passed away on April 22, 2020, at the age of 76, after a life well-lived. He was born in Ainsworth, Nebraska on May 20, 1943 to Harold and Irene (Rauscher) Schelm. He was baptized and confirmed at the Zion Lutheran Church at Ainsworth. Larry grew up on the family farm and graduated from Ainsworth High school in 1961. He married Sandra (Miller) on September 3, 1965. He graduated from University of Nebraska-Lincoln in January 1966 with a degree in vocational education. After a short teaching stint, he returned to Ainsworth and began farming. He loved being outside and watching the crops grow. With some luck, a few people who believed in him, a lot of hard work, some savvy investments (though some would have said crazy), a few swear words, and lots of number crunching, he proved himself to be a successful farmer. He was a man of high expectations and integrity who believed in doing the job right the first time. He was respected and loved, and will be missed. Larry was preceded in death by his father, Harold Schelm, and brother, Stanley Schelm. He is survived by his wife, Sandra of Ainsworth; his children, Lori Schelm (Tim Harkins) of Kansas City, Missouri, Steve Schelm (Reiko Misumi-Schelm) of Plymouth, Michigan and Dana Buurman of Bennington, Nebraska; grandchildren, Grace and Grant Harkins, Zachary and Matthew Buurman, Jackson and Braden Schelm; his mother, Irene Schelm of Ainsworth; sister Jan Vogelsang (Brian) of Ainsworth; sister-in-law Rebecca Schelm of Ainsworth; brothers-in-law, Dave Miller (Thelma) of Fort Calhoun, Nebraska and Jim Miller (Nancy) of Torrington, Wyoming, and Carole Miller of Cheyenne, Wyoming; along with nieces, nephews and other family members. In light of the Covid-19 pandemic, a private family inurnment was held Thursday, April 23, 2020 in the Lutheran Cemetery near Ainsworth. Pastor Georg Williams officiated at the event. Memorials in Larry's memory can be made to Zion Lutheran Church or the Brown County Foundation Endowment Fund. Hoch Funeral Home of Ainsworth is assisting the family with arrangements.

Larry William Schelm passed away on April 22, 2020, at the age of 76, after a life well-lived. He was born in Ainsworth, Nebraska on May 20, 1943 to Harold and Irene (Rauscher) Schelm. He was baptized and confirmed at the Zion Lutheran Church... View Obituary & Service Information

The family of Mr. Larry W. Schelm created this Life Tributes page to make it easy to share your memories.