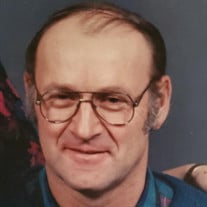 Larry Douglas May was born on March 12, 1943 at Bassett, Nebraska to William H. and Rose V. (Sandall) May. He was the youngest of three children. He lived with the family until April 30, 1967 when he married Linda Nelson. They then moved to his mother’s homestead, where they spent the rest of his years. On February 27, 1971 their first child, Glen was born and on February 16, 1974 their second child, Leann was born. Over the years Larry helped on the family ranch as well as other jobs. After graduating from Rock County High School in 1961 he worked at Bassett Motors until 1970. Larry then went to work at Coash Inc. until January 1983. He wanted to start his own business; May’s Repair was formed at this time. He enjoyed working on equipment, machinery, and various things for his customers. When he heard the words “that won’t work,” he would find a way and it would work. Larry continued to work in the shop right up until the day he was put into the hospital. Larry was always an inventor, even in his grade school years. He was building things to help the family make the ranching easier. He and his brother DeLane would take fishing trips each summer. They loved trout fishing together. Larry was also an avid deer hunter; he shot several big deer one of them still sits in the top 20 in Nebraska. He always helped his children with 4-H and FFA projects. When Leann decided she wanted to build a greenhouse, he helped her design and come up with a plan to build it. Larry passed away September 27, 2020 at University of Nebraska Medical Center in Omaha. Larry was preceded in death by his grandparents, parents, and older sister Joyce. He is survived by his wife Linda of 53 years; son, Glen May and wife Charla of Bassett, Nebraska; daughter, Leann May-Burr and husband Justin of Elkhorn, Nebraska; older brother DeLane May of Bassett; and special helper, Sheyenne Thompson who enjoyed learning how to do various jobs in the shop. Graveside Services were held on Friday, October 2, 2020 in the Bassett Memorial Park Cemetery in Bassett. Pastor Dennis Quigley officiated at the service. Casketbearers were: Teddy Morton, Merv Buoy, Monte Strelow, Steve Larson, Todd Stahl and Tony Stahl. In lieu of flowers, memorials have been suggested to the Bassett Volunteer Fire Department or to the BKR 4-H Scholarship Fund in Larry’s name. Arrangements were under the direction of the Hoch Funeral Home of Bassett.

Larry Douglas May was born on March 12, 1943 at Bassett, Nebraska to William H. and Rose V. (Sandall) May. He was the youngest of three children. He lived with the family until April 30, 1967 when he married Linda Nelson. They then moved... View Obituary & Service Information

The family of Larry D. May created this Life Tributes page to make it easy to share your memories.