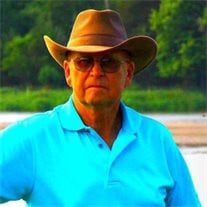 Lanny Ray Heyden was born February 24, 1943 to Clifford "Tiff" and Goldie (Ludemann) Heyden in Gregory, South Dakota and passed away August 25, 2016 near his home north of Newport, Nebraska due to injuries suffered in an accident. Lanny attended rural schools in northern Rock County. Instead of riding a horse to school, Lanny put a washing machine motor on his bike and that's how he got to school. He attended Rock County High School in Bassett, Nebraska and graduated with the class of 1961. After high school he attended auto body school in Omaha, Nebraska and then returned home to his dad's ranch. Lanny married Sue Riley on November 23, 1962. To this union four children were born, Shannon, Stacy, Shawn and Lana Sue. Lanny was an avid welder and neighbors often commented how good he was at making a haystack without a cage. He was always known for his love for animals and teased about always having a bucket calf. He was a man of few words and very humble. His grandchildren always brightened his world. Lanny was active for years with the Newport School Board and also served with the ASCS office as a field reporter. He was preceded in death by his parents Tiff and Goldie Heyden; his only sibling Joanne Peterson, and nephew Brian Hallock. Survivors include his wife Sue of 53 years; children, Shannon and wife Suz of Stuart, Nebraska, Stacy Strelow and husband Monte of Bassett, Shawn and wife Shannon of Bassett, Lana Arrowsmith and husband John of Bassett; eight grandchildren and six great-grandchildren. Funeral Services were held on August 29, 2016 at the Holy Cross Catholic Church in Bassett, Nebraska. Father Phil Flott served as Celebrant. The Eulogy was given by Loren Ammon. Music was provided by Trudy Nolles. Special music selections of "Falling Leaves" and "Never Grow Old" were provided by Vanessa Kenaston. The song "Amazing Grace, My Chains Are Gone," was song and played by Randy Anderson during the recessional. Pallbearers were, Shawn Heyden, Shannon Heyden, Monte Strelow, John Arrowsmith, Clifford Heyden, John Strelow and Justin Ramm. Honorary bearers were, Bob Keck, Lorrin Ammon, Bob Hutton, Ken Mitchell, Trent Allison, Larry Skrdla and Bob Doke. Burial followed at the Willowdale Cemetery near Newport, Nebraska. Hoch Funeral Home of Bassett was in charge of the arrangements.

Lanny Ray Heyden was born February 24, 1943 to Clifford "Tiff" and Goldie (Ludemann) Heyden in Gregory, South Dakota and passed away August 25, 2016 near his home north of Newport, Nebraska due to injuries suffered in an accident. Lanny attended... View Obituary & Service Information

The family of Mr. Lanny Ray Heyden created this Life Tributes page to make it easy to share your memories.