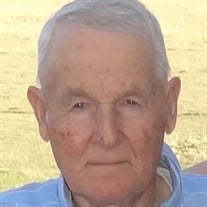 Klane R. Leonard was born October 22, 1932, in Bassett, NE, to Louis G. and Alma (Patitz) Leonard. He passed to his eternal reward on August 20, 2019, at the Norfolk Veterans Home in Norfolk, NE. Klane grew up in Bassett, where he attended grade school. He graduated from Rock County High School in 1952. He was the youngest of five boys. He would tell of hopping the train to Long Pine, spending the day in Pine Creek, then riding the train back to Bassett that night. After one of the blizzards that hit in 1949, he walked from Bassett to the family land on the Niobrara by Riverview. After high school, Klane was drafted into the Army, serving from 1953-55. He was stationed in Augsburg, Germany. He returned to Bassett after the Army, and then spent a semester studying at the University of New Mexico with Dr. Miles Zintz, a pioneer researcher in adult learning. Back in Bassett, he worked on the ranch with his father, and enjoyed spending time with his nieces & nephews who would often visit Uncle Klane and their grandparents. Klane’s life changed forever when he learned there was a young teacher, Miss Getha E. Wilkins, living across the street. Their first date was on May 21, 1961. They were married in Bassett at the Assembly of God Church on August 13, 1962, and took their honeymoon trip to the Seattle World’s Fair in his 1958 Chevy Bel-Air. They made their home on his ranch in the Niobrara River Valley near Riverview. In 1979-80, he decided it was time to build on the long-vacant family lot at Hidden Paradise. The new Leonard cabin became a beloved family gathering place. After selling his cattle herd, Klane worked at Bassett Livestock Auction for over 30 years. He was a devoted husband to Getha, especially as she slowly succumbed to dementia. He moved to town in 2015, but drove out to the River almost every day. In December 2017, Klane became a resident of the Norfolk Veterans Home. He was the proud father of his children, Kurt and Elaine. Klane attended almost every game, meet, concert, play, or contest in which they participated. He attended his grandson’s 8th grade graduation in May, and always enjoyed quick piano recitals during visits from his grandkids at the Vets Home. He was a member of the Bassett I.O.O.F. Lodge, Bassett Legion Post 123, and the Bassett Assembly of God Church. Klane is survived by Kurt (Brandy) of Bassett and Elaine (Brian) Buescher of Omaha, NE; seven grandchildren: Alexander, Elizabeth, Catherine, Anna, and Nicholas Buescher of Omaha, Grace Porter of Ainsworth, NE, and Sabree Porter of Chadron, NE; sister-in-law JoAnn Leonard of Rapid City, SD; nieces & nephews: Sharon Leonard of Rapid City; Scott Leonard of Enola, PA; Jim Leonard of Portland, OR; Bruce Leonard of Houston, TX; Lisa Marshall; and Kevin Spencer of Rapid City; Don White of Omaha; and Lloyd J. White of Dallas, TX. He was preceded in death by his wife of 50 years, Getha, his parents, brothers and sisters-in-law Quentin, Vincent, Kermit & Francine, and Kenneth & Jeanette; in-laws Keith Wilkins, and Opal Jean & Lloyd White; and niece Suzie Kerzman. Graveside Memorial Services were held at the Bassett Memorial Park Cemetery on September 7, 2019 with Pastor Dennis Quigley officiating the service. Elizabeth Beucher played "Mansion Over The Hilltop" as a flute solo. Military Honors were provided by the Bassett American Legion Post #123. Hoch Funeral Home of Bassett assisted with the arrangements. In lieu of flowers, memorial were suggested to the Bassett American Legion Post #123, the Bassett Volunteer Fire Department, or the Springview Volunteer Fire Department.

Klane R. Leonard was born October 22, 1932, in Bassett, NE, to Louis G. and Alma (Patitz) Leonard. He passed to his eternal reward on August 20, 2019, at the Norfolk Veterans Home in Norfolk, NE. Klane grew up in Bassett, where he attended... View Obituary & Service Information

The family of Mr. Klane R. Leonard created this Life Tributes page to make it easy to share your memories.