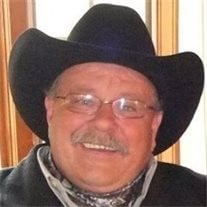 Kevin Dean Bowers, 55 of Ainsworth, Nebraska, passed away Sunday, June 9, 2013. He was born the second of six children in Fairmont, Minnesota, on June 10, 1957, to Ken and Sylvia (Nelson) Bowers. In his earlier years, Kevin lived in northeast Nebraska and Arizona before settling in Denver, Colorado. He graduated from Thornton High School in Thornton, Colorado, in 1975. He married Norma Jean Dickerson in 1976. Kevin and Jeanne were blessed with two children, Jeremiah Dean Bowers and Sarah Jean Bowers, who were born in Thornton and Golden, Colorado. During his time in Colorado, Kevin was a bull and saddle bronc rider, competing in many professional rodeos. Shortly thereafter, they moved to northern California, where he continued his lifetime career as an electrician. Kevin brought his love of horses to California, teaching Sarah and Jeremiah how to ride bareback. After the passing of his wife, Jeanne, he moved his family to Iowa. He was later united in marriage to Janice Bailey. To this union, he was blessed with two stepdaughters, Tashia and Kasey, to which he thought of as his own and who later brought him beautiful grandchildren who adored him and called him "Pappy." Kevin worked as a journeyman electrician for Maytag Corporation, in Newton, Iowa, for over 15 years along with owning an electrical company, Current Electric. He was also an Adjunct Instructor, where he taught the National Electric Code for Des Moines Area Community College. Following a divorce, Kevin moved to northeastern Nebraska, where he continued his career as an electrician, in addition to working on a ranch, where he lived his true dream of being a cowboy. Continuing with his love for horses and the country life, he moved to Ainsworth, where he married his current wife, Cara Dawn McCoy. To this union, he was blessed with three stepdaughters, Catie, Jami, and Halli. At the time of his passing, Kevin was working as a Field Manager/Electrician for IES/Kayton Electric, working on projects in Lone Tree and Iowa City, Iowa. This enabled him to spend quality time with his family in Iowa each week. Kevin was a very talented person. Some of his interests and hobbies included; riding horses, playing guitar, singing, dancing, writing poetry and quotes, drawing, studying history, watching western movies, and studying his genealogy. There was always a story to be told, a joke to tell, and a piece of motivational advice to be shared among his family, friends, apprenticeship electricians, and college students. Kevin is preceded in death by his father, Ken Bowers, his first wife, Norma Jean Bowers, infant sister, Debbie Bowers, step-son, Tyler Bowers; Grandparents, Tom and Babe Bowers; Syd Nelson; Evelynn Phelps; Aunt, Donna Bowers. He is survived by his wife Cara, of Ainsworth; son Jeremiah Bowers of Evergreen, Colorado; daughter, Sarah Bowers (Jennifer) of Des Moines, Iowa; step-daugthers, Kasey (Doug) Allen of Bloomfield, Iowa, Tashia (Jeff) Foster of Ankeny, Iowa, Catie(Tucker) Iverson of Bassett, Nebraska, Jami and Halli Haskell of Ainsworth. Mother, Sylvia Bowers of Englewood, Colorado; sisters, Kim (Joe) Parazoo, of Sheridan, Oregon and Shelly (Bob) Miller of Leadville, Colorado; brothers, Jeff (Gail) Bowers of Evergreen, Colorado and Mike (Diana) Bowers of Littleton, Colorado. Grandchildren, Brandon, MacKenzie, Courtney, Megan Allen all of Bloomfield, Iowa, Ryan, Tyler, and Makenna Foster all of Ankeny, Iowa. Father-in-law, Newell McCoy, of Springview, Nebraska and Grandmother-in-law, Blanche McCoy, also of Springview. Funeral Services were held on June 14, 2013 at the United Methodist Church in Ainsworth, Nebraska. Pastor Eldon Davis officiated over the service. CD selections of "If I Can Only Imagine" by MercyMe, "If Heaven" by Andy Griggs, "Home" by Blake Shelton were provided. Pallbearers were,Jeff Bowers, Mike Bowers, Jeremiah Bowers, Kristopher Bowers, Shane Bowers, Steve Bowers and Scott Bowers. The eulogy was given by Kevin's brother, Jeff Bowers. Burial was held at the Ainsworth Cemetery in Ainsworth. Hoch Funeral Home of Ainsworth was in charge of the arrangements.

Kevin Dean Bowers, 55 of Ainsworth, Nebraska, passed away Sunday, June 9, 2013. He was born the second of six children in Fairmont, Minnesota, on June 10, 1957, to Ken and Sylvia (Nelson) Bowers. In his earlier years, Kevin lived in northeast... View Obituary & Service Information

The family of Mr. Kevin D. Bowers created this Life Tributes page to make it easy to share your memories.