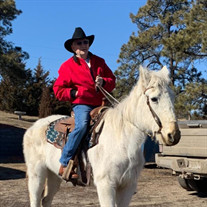 On April 5, 2021, Kerry David Ebert passed away at the age of 70 in Bassett, Nebraska. Kerry was born on September 14, 1950 in Fort Morgan, Colorado to Harold and Alice (Price) Ebert. He grew up on the family ranch in Byers, Colorado with his parents and brother, Larry. In 1970, he joined the Army and his birthday was the first selected in the lottery draft that year. Kerry was a Private First Class and served two years active duty as a radar operator specialist and a chaplain assistant. In 2004 he met his wife, Cathy, and they married in 2006. To the marriage, Kerry brought his two sons, Kres and Kasey and Cathy brought her daughter, Jessica. They lived in Byers until moving to Bassett, Nebraska in 2008. Throughout his life, Kerry had many interests and hobbies. He owned a trucking company, enjoyed working harvest, building puzzles, animals, welding, hunting, fishing. He could fix anything. He even learned how to fly a plane. Kerry is preceded in death by his parents, Harold and Alice Ebert and granddaughter Tessa Ebert. He is survived by his wife Cathy; children, Kres (Julie) Ebert, Kasey (Angie) Ebert and stepdaughter Jessica Johnson; grandchildren, Matthew, Savannah, Meghan, Parker, Krayton; brother, Larry Ebert; nieces, nephews and cousins. Kerry is greatly loved and will be missed by all. A Memorial Service was held on Thursday, April 8, 2021 at the St. Mary’s Episcopal Church in Bassett with Father Randy Goeke as Celebrant. Music was provided by Mike Skulavik with the congregation singing, “Amazing Grace” and the CD selections of “Precious Memories” and “I’ll Fly Away” by Alan Jackson were played. A Bible Reading was read by Kerry’s sister-in-law, Cindy Alexander. The obituary was read by granddaughter, Meghan Ebert. Special Memories were given by son, Kres Ebert and his wife, Julie and stepdaughter, Jessica Johnson. A Military Flag Presentation was conducted by the Bassett American Legion Post #123. A Private Family scattering of ashes will take place in Byers, Colorado at a later date. Memorials were suggested to the family in Kerry's name for future designation.

On April 5, 2021, Kerry David Ebert passed away at the age of 70 in Bassett, Nebraska. Kerry was born on September 14, 1950 in Fort Morgan, Colorado to Harold and Alice (Price) Ebert. He grew up on the family ranch in Byers, Colorado with... View Obituary & Service Information

The family of Kerry D Ebert created this Life Tributes page to make it easy to share your memories.