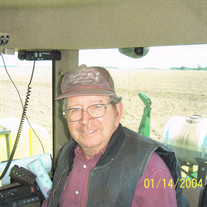 Kenneth was truly a firecracker, born on July 4th, 1925 to Kennedy “Ted” and Goldia (Luehrs) O’Hare in Johnstown, Nebraska. His father joyously announced he had a boy at the annual Isaac Walton 4th of July picnic. Kenneth joined sister, Velma and brother, Marvin at their Johnstown home. Kenneth passed away Tuesday, December 11, 2018 at the Brown County Hospital in Ainsworth, Nebraska. With his siblings, Kenneth attended school in Johnstown. During his junior year, a new female student moved to Johnstown, and Kenneth immediately got her attention by dragging her dress sashes in the mud. Thus, began the life-long love between Kenneth and Ruth. After graduation from Johnstown High School, Kenneth joined the United States Army where he served from 1944-1946. After his service, Kenneth returned to Johnstown to marry his high school sweetheart, Ruth Day on November 17, 1946. They started their life together at the ranch south of Johnstown. Kenneth and Ruth were true soul mates for over 72 years of marriage. They were often seen holding hands, even during this past year. They had five children, Corby, Cindy, Doug, Becky and Tod. They were blessed with 10 grandchildren: Ronna, Dane, JD, Kendy, Colby, Jeremy, Scott, Pat, Branden and Alyx and 18 great-grandchildren. Kenneth loved when his family got together, especially for the annual 4th of July birthday party and corn pictures. Kenneth was a proud Sandhills rancher/farmer and loved the rolling hills and working the soil. He shared his love of ranching/farming with his family, including all four generations and was very delighted to have any and all help. He served with numerous organizations including the Brown County Fair Board, Ainsworth United Methodist Church, Ainsworth School Board, the Sandhills Cattle Association, Nebraska Cattlemen, National Cattlemen, Nebraska Stock Growers, the University of Nebraska Beef Club and Production Credit Association. He won several honors and awards including Elk of the Year, Farm/Ranch Family of the Year, he was a 70-year member of Ainsworth American Legion Post #79, and he was inducted in to the Cowboy Hall of Fame. Kenneth loved to travel. As a couple, Ken and Ruth traveled extensively. Kenneth liked a good joke, laughing, and learning new things. He enjoyed Nebraska football, inspecting corn and cattle, and having coffee with friends. Kenneth was preceded in death by his parents, his mother-in-law and father-in-law, his siblings, a son-in-law Mike McNally, a daughter-in-law Jan O’Hare and great-grandson Oliver Lee. He is survived by his wife Ruth; sons: Corby, Doug and wife Linda, Tod and wife Sue; daughters: Cindy and Becky; 10 grandchildren, 17 great-grandchildren, nephews and nieces and many other family and friends. At the age of 93, he lived a full and complete life. Funeral Services were held on December 29, 2018 at the United Methodist Church in Ainsworth with Pastor David Randall officiated at the service. Music was provided by, Marilyn Williams, and a special music selections of “Danny Boy” by JD O’Hare and “Just A Closer Walk With Thee” provided by Scott O’Hare and Patrick O’Hare. The CD selection of “Old Rugged Cross” by Tennessee Ernie Ford was played. The Eulogy was presented by Corby O'Hare. Casket bearers were, Ronna Fritz, Dane Sears, JD O’Hare, Kendy Heskett, Colby O’Hare, Jeremy O’Hare, Scott O’Hare, Patrick O’Hare, Branden O’Hare and Alyx O’Hare. Honorary bearers were all of Kenneth’s other family and friends. Organizational Rites were conducted by the Ainsworth Elks Lodge #1790. Burial was in the Ainsworth Cemetery with military honors by Ainsworth American Legion Post #79. Hoch Funeral Home was in charge of the arrangements. Memorials were suggested to the family in Kenneth’s name for a future designation. To leave an online condolence, please visit www.hochfuneralhome.com .

Kenneth was truly a firecracker, born on July 4th, 1925 to Kennedy &#8220;Ted&#8221; and Goldia (Luehrs) O&#8217;Hare in Johnstown, Nebraska. His father joyously announced he had a boy at the annual Isaac Walton 4th of July picnic. Kenneth... View Obituary & Service Information

The family of Mr. Kenneth W. O'Hare created this Life Tributes page to make it easy to share your memories.