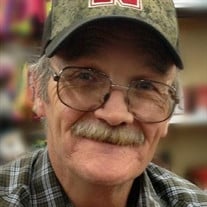 Kenneth Clay Millard, 61, passed away December 27, 2019, at his home in Springview, Nebraska. He was born in Pueblo, Colorado, to Jack L. and Carol M. (Warren) Millard. Ken spent his early years there before his family moved first to Cavour, South Dakota, in 1969, then later to Carter, South Dakota. They settled in Springview in 1976, and Ken finished school at Keya Paha County High School. He married his wife Debby Dillon on April 24, 1981. They had two children, Amanda and Joshua. The couple lived in Bassett for a few years before making Springview their home. Ken started his career as a truck driver at age 18. He hauled grain to neighboring states, and then became a long-haul truck driver for the next 30 years. His job took him all across the United States from oil fields in Wyoming to tobacco fields in North Carolina. Ken was an expert at giving driving directions. He could not only tell you what road you needed to take, but the exit, mileage and expected arrival time, too. Ken enjoyed hunting and fishing when he wasn't on the road. He and his son spent many early mornings waiting for a big buck to cross their path during hunting season. They ventured to Alaska to hunt moose, too. Ken's heart melted when his first granddaughter was born. A proud grandpa, he wouldn't hesitate to stop in the baby department of any store to see if a cute outfit hung on a clothing rack. He would take any trucking load within a 100-mile radius of his daughter and husband's home in Belmont, North Carolina, for a chance to see his little granddaughter. Ken was handy with tools and could figure out a way to repair something if he just thought about it long enough. He did most of the repairs to his gold Kenworth semi-truck himself. He was a skilled driver, earning a Million Mile Safe Driver achievement as an owner-operator for the Landstar Company, something that takes truckers 10 years to achieve. Ken is survived by his wife, Debby; son, Joshua Millard and wife Jenna of Volga, South Dakota; daughter, Amanda Memrick and husband, Matthew of Belmont, North Carolina; two grandchildren, Amelia and Ella Memrick; his father and mother, Jack and Carol Millard of Grand Island, Nebraska; and a sister, Debbie Millard of Fullerton, Nebraska; along with numerous cousins and other relatives. Funeral Services were held on Saturday, January 4, 2020 at the New Hope Community Church in Springview with Pastor Tim Wyrick officiating at the service. Music was provided by Kristen Jerred playing the song “On The Wings Of A Dove” and the congregation singing “I’ll Fly Away.” Casketbearers were: Cody, Austin and Tommy Attebury, Matt Memrick, Russ Heerten and Brian Munger. Burial was in the Mt. Hope Cemetery under the direction of the Hoch Funeral Home of Ainsworth. Memorials were suggested to the family in his name. Online condolences may be made to the family at www.hochfuneralhome.com.

Kenneth Clay Millard, 61, passed away December 27, 2019, at his home in Springview, Nebraska. He was born in Pueblo, Colorado, to Jack L. and Carol M. (Warren) Millard. Ken spent his early years there before his family moved first to Cavour,... View Obituary & Service Information

The family of Mr. Kenneth C. Millard created this Life Tributes page to make it easy to share your memories.