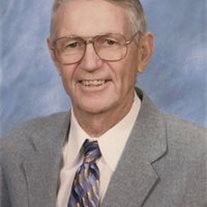 Kenneth Minnig, the youngest of six children, was born April 16, 1927 on a ranch southeast of Bassett, Nebraska to Caroline (Bohl) and Wellington Minnig. He died on September 16, 2014 at Parkview Manor in Stuart. Ken grew up and called Rock County Nebraska his home for his entire life. He served in the US Merchant Marines at the end of WWII. Ken and Geneva Boyd were married in 1948, settled in Bassett, and were members of the Bassett and Ainsworth Methodist churches. For most of his adult life Ken was a member of the Independent Order of Odd Fellows (IOOF). He worked for nearly 40 years as a carpenter, eventually owning his own company, KM Construction. Ken was also an avid fisherman, hunter, and gardener. In the 1980s and 1990s, he and Neva were members of the local square dance club. They traveled to many towns in Nebraska to support other clubs and to the National Square Dance Convention. Following his retirement where he built a large cabin on Pine Creek near Long Pine, NE, where they enjoyed more than 25 summers in the peace and quiet of "Whispering Pines". Ken planted more than 1,100 trees in the community to replace dead and dying elm trees. He was instrumental in the creation of the Bassett Tree Board and in the town being designated as a "Tree City USA" community for 15 straight years. Ken started an area within the Bassett City Park in which the tree board plants memorial trees for area families' deceased members. He also organized an Arbor Day program at the elementary school. For these community improvement efforts, Ken received the Knights of Ak-Sar-Ben Good Neighbor award. Ken was preceded in death by his wife Neva who passed away August 20, 2014; a daughter Debra; his parents; and siblings George (and Neva) Minnig, Eldon Minnig (Bertha Minnig Brown), Lorene (Kenneth) Bentley, Dale (R'Lene) Minnig, and Evelyn Minnig. The last of his generation from the family, Ken is survived by sons Doug (Patricia) Minnig of Bulverde, Texas, and Jeffrey (Penny) Minnig of Flower Mound, Texas; four grandchildren; one great-grandson; and many nieces and nephews.

Kenneth Minnig, the youngest of six children, was born April 16, 1927 on a ranch southeast of Bassett, Nebraska to Caroline (Bohl) and Wellington Minnig. He died on September 16, 2014 at Parkview Manor in Stuart. Ken grew up and called Rock... View Obituary & Service Information

The family of Mr. Kenneth D. "Ken" Minnig created this Life Tributes page to make it easy to share your memories.

Kenneth Minnig, the youngest of six children, was born April...