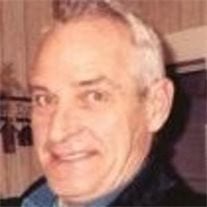 Kenneth L. Jones, 69, of Ainsworth, Nebraska, passed away June 22, 2013 at his home. He was born the 3rd, out of four children in Ainsworth, on January 20, 1944 to Merle and Lois Jones. He spent most of his childhood on a farm northeast of Ainsworth. After graduation from Ainsworth High School in 1962, he worked in the hay field near Springview, Nebraska. Later he traveled to Idaho to work road construction. In 1965, Ken enlisted in the army, receiving an honorable medical discharge shortly after enlistment. He married Carolyn McConnell on December 22, 1967. They were blessed with two sons, Shane and Darian. Ken spent a year and a half in the oil fields in Wyoming. Ken and Carolyn then moved to their farm northeast of Ainsworth where they began farming with his brother Dave. In 1980, Ken started working at the Ainsworth Feed Yards, where he was instrumental in building and producing ethanol. He was also very involved in the farming and irrigating for many years. Ken's last years of employment were at the Ainsworth Care Center as head of the maintenance department. Ken's abilities were endless, he was always coming up with new ideas, and solutions whenever the need arose. Ken was also a wonderful co-worker, always willing to give a helping hand. Kens greatest passion and joy in life was his family, camping, fishing and gardening. He took great pride in all of the projects he made for Carolyn, and teaching his beloved grandchildren. He loved to grow his garden with herbs and beautiful flowers, fruits and vegetables. He enjoyed the great outdoors, taking many photos of his family, and beautiful scenery. Ken was also blessed with a wonderful sense of humor. Ken was preceded in death by his father Merle, and brother, David. He leaves to cherish his memory, his wife Carolyn, sons, Shane and wife Jenn, Darian, eight grandchildren, mother Lois, all of Ainsworth. His sisters, Lila Jones and Rena Cathey of Amarillo, Texas, sister-in-law Carol Jones, of Ainsworth, brother-in-law, Larry McConnell of Fremont, Nebraska, many nieces and nephews, and a host of friends. A celebration of life service was held on Friday, June 28, 2013 at the Evangelical Free Church in Ainsworth, Nebraska. Pastor Mick Thornton officiated over the service. Special CD selections of "Grampa" by the Judds and "See You Again" by Carrie Underwood, were provided. Honorary bearers were all of Ken's other family and friends. A private family inurnment will be held at a later date at the Buffalo Flats Cemetery near Ainsworth.

Kenneth L. Jones, 69, of Ainsworth, Nebraska, passed away June 22, 2013 at his home. He was born the 3rd, out of four children in Ainsworth, on January 20, 1944 to Merle and Lois Jones. He spent most of his childhood on a farm northeast of... View Obituary & Service Information

The family of Kenneth L. Jones created this Life Tributes page to make it easy to share your memories.