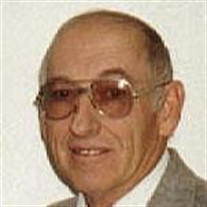 Kenneth Leroy Fling was born May 27, 1939, at Ainsworth, Nebraska, to Jay E. Fling and Della H. (Hagerman) Fling. He passed to his eternal home on August 5, 2019. Kenny grew up in Ainsworth on the family farm east and south of town. He attended grade school, and then graduated from Ainsworth High School in 1957. Many people knew Kenny as a good athlete and especially as a fast runner. He ran and did well in the 440, his race of choice. He had many fond memories of his time spent with friends and classmates running track. After high school he attended the University of Colorado for one semester and then transferred to Kearney where he majored in music. In 1962, Kenny volunteered for the draft and served two years in the United States Army being assigned to the 7th Army Band near Stuttgart, Germany. While the Band was playing in Germany, President Kennedy was visiting and passed in front of Kenny, being approximately six to eight feet away. Kenny said, "Don't tell anybody, but I quit playing for a second. It was so overwhelming." He got to see many sights: the Berlin Wall, London Buckingham Palace, and Big Ben. He also met up with his sister Mildred who was performing on a cruise ship called the "Constitution" in Genoa, Italy. While in the service in Washington D.C. he accepted Christ as his Lord and Savior as a result of attending Bible Studies. The men in the Bible Study group exemplified a lifestyle that Kenny didn't have, but wanted. When they prayed it was if they were talking to someone right there in the room. Once he even raised his head and looked around the room to see who they might be talking to. One evening after the study, Kenny went to the chapel, knelt down and prayed, asking God to forgive him of his sins and to take control of his life making him a child of God. After Kenny was honorably discharged in February 1964, he met his sister, Millie, in New York and they saw many sites in the city before he returned home. Once back in Ainsworth, he started going to the Nazarene Church where he saw a pianist that caught his eye. On August 22, 1965, Kenny married Elaine Lotspeich. To this union two children were born, Kayla Michelle (Fling) Schrantz and Dennis Lavern Fling. They moved to Omaha, Nebraska where Kenny attended Grace College of the Bible for two years. They then returned to the farm and Kenny farmed with his dad Jay, Uncle Glen, and cousin Don, who always seemed more like a brother than a cousin. Kenny is preceded in death by his parents, Jay and Della Fling, his in-laws, Merritt and Lois Lotspeich, brothers-in-law and sisters-in-law, Duane and Betty Lotspeich and Larry Rap and Lola Rap Nelsen, granddaughter Tiffany Nicole Schrantz born cradled safely in Jesus' arms, grandparents, aunts, uncles, and cousins. Left to mourn is his wife Elaine, daughter Kayla (Russ) Schrantz, of Springview, Nebraska and son Dennis (Krista) Fling of Mankato, Minnesota; grandchildren, Brittany (Turee) Benson, Breanna (Dusty) Foth; Lael, Trey, Kyria and Terrian Fling; great- grandchildren Bentley and Maevlee Benson, and Allison Foth; sister, Mildred (Richard) Harris; brother-in-law, Ron Nelsen; cousins, nieces and nephew. Kenny called the farm his "home" from 1939-2019. His eternal, forever home is Heaven since August 5, 2019. Memorial Services were held on Saturday, September 28, 2019 at Hoch Funeral Home in Ainsworth, Nebraska with Pastor Joel Wentworth, David Graves, and Pastor T. J. Parker officiating at the service. The CD music selection of “Sheltered In The Arms of God“ by Kenley Udd, Geoff Smith, Steve Swanson, Sam Courts, and Mary Courts was played. Honorary Bearers were: Blair Williams, Roger Brede and Brent Johnson. A Military Flag Presentation was provided by Ainsworth American Legion Post #79. Hoch Funeral Home was in charge of the arrangements. Memorials were suggested to Gideon’s International or to the Sandhills Cancer Fund. A private family scattering of the ashes was held at a later time. To leave an online condolence visit www.hochfuneralhome.com.

Kenneth Leroy Fling was born May 27, 1939, at Ainsworth, Nebraska, to Jay E. Fling and Della H. (Hagerman) Fling. He passed to his eternal home on August 5, 2019. Kenny grew up in Ainsworth on the family farm east and south of town. He attended... View Obituary & Service Information

The family of Mr. Kenneth L. "Kenny" Fling created this Life Tributes page to make it easy to share your memories.