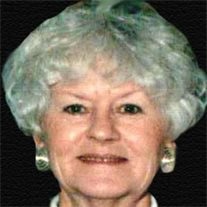 Kenna Dawn (Scott) Ebert was born on December 15, 1947 in Vernal, Utah. She was born to Enoch and Delores (Osiek) Scott. She grew up in Vernal attending Uintah High School in Vernal. Kenna met her husband Larry in Meeker, Colorado. They were married on November 23, 1970. To this marriage, Kenna brought her two sons Jerry and Vince and Larry brought his daughter Susan. Susan felt that Kenna was as much of a mother to her as her own mother. Kenna and Larry moved to Kanorado, Kansas. They were soon blessed with their daughter Laurie Dawn. The family then moved to Oakley, Kansas. The family lived in Oakley until 1976, when Larry had the opportunity to buy an aerial spraying operation in Bassett, Nebraska. Kenna and Larry moved their family to Bassett. In 1980, Kenna and Larry were blessed with their son Larry II (Two). Kenna loved raising her children in Bassett. She made friends wherever she went. Kenna enjoyed spending time with her children and grandchildren, gardening, and coffee with the girls. Kenna had two full time jobs: a homemaker and Larry's right hand. She kept an immaculate home and yard. Kenna would never let Larry leave the house without a perfectly ironed shirt! Kenna was a natural caregiver. She was always ready to lend a helping hand to anyone in need. She won the Ak-sar-ben Good Neighbor Award. Kenna was diagnosed with cancer in August. Just two months ago, Kenna was helping Larry haul water and supplies to the fields Larry was spraying. Only four days after helping Larry, she underwent surgery placing a rod in her leg. Kenna passed away at Rock County Hospital in Bassett at the age of 65. Kenna had strong faith and there is a special place in heaven for her. She will be greatly missed by her family and friends that she left behind. Kenna was preceded in death by her parents Enoch and Delores Scott; her brother Dick Scott, and her sister Donna Barrett Etchen . Those thankful for sharing her life are husband Larry; children, Susan Colombo and husband Robert of Petaluma, CA, Jerry Caldwell and Jody Stewart of Stanton, Vince Caldwell and wife RaeDean of Newport, Laurie Irish and husband Lee and Larry Ebert II and wife Nicole all of Bassett; 12 grandchildren, one great-granddaughter; sister-in-law Bonnie Scott of St. George, Utah; and nieces and nephews. Funeral Services were held on October 22, 2013 at the United Methodist Church in Bassett, Nebraska with Pastor Dennis Quigley and Pastor Rod Heilbrun officiating over the service. Special music was provided by Kristie Sybrant-Keller and Judith Sybrant-Lemp singing, "Amazing Grace" and "It Is Well With My Soul". Pallbearers were, Brock Caldwell, Braydon Caldwell, Braynt Irish, Taylor Caldwell, Christopher Coulter and Jamin Zeman. Honorary bearers were, Trace Ebert, Payton Ebert, Dominic Colombo, Tyler Colombo, Brittany Caldwell, Brooke Irish, Nicole Colombo, Averi Ebert and Brleigh Zeman. Special remarks were given by Taylor Caldwell. Burial was held at the Bassett Memorial Park Cemetery. Memorials were directed to the Rock County Hospital or to the Emmanuel Community Church of Bassett. Hoch Funeral Home was in charge of the arrangements.

Kenna Dawn (Scott) Ebert was born on December 15, 1947 in Vernal, Utah. She was born to Enoch and Delores (Osiek) Scott. She grew up in Vernal attending Uintah High School in Vernal. Kenna met her husband Larry in Meeker, Colorado. They were... View Obituary & Service Information

The family of Kenna D. (Scott) Ebert created this Life Tributes page to make it easy to share your memories.