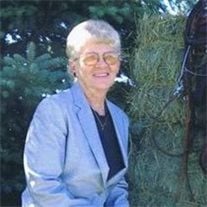 Kay Janice Gross was born on January 22, 1939 to Orville and Lela (Williams) Gross at Broken Bow, Nebraska and passed away in the Brown County Hospital, at Ainsworth, Nebraska on December 21, 2014 after a long illness. Kay married Eddie Gracey on June 3, 1956 at Broken Bow, Nebraska. Two daughters were born to this union, Connie and Sharon. Kay spent her life living in the Sandhills of Nebraska, working on ranches along side Eddie, doing whatever needed to be done. When they bought their place near Bassett, Nebraska, she worked in the feed yard and worked in the Rock County Hospital and Nursing Home until she retired. She loved her flower gardens, crocheting afghans and many more craft projects. Kay loved to watch Nascar and football, (college or pro, if it was football, she watched it.) She also enjoyed her pets. Kay enjoyed riding her horses and also hearing the stories Connie would tell of the yearling colts which Connie worked with this past summer. Kay is preceded in death by her parents, three brothers and one sister. She is survived by her husband Eddie of Ainsworth; daughters, Connie (Dan) Bennett of Ainsworth, Sharon (Dean) Stiefel of Crookston, Nebraska; Granddaughter, Tammy (Lance) Hauser of Marshalltown, Iowa; Grandson, Ross Brockley of Valentine, Nebraska. A graveside memorial service was held on December 24, 2014 at the Mt. Hope Cemetery near Valentine, Nebraska with Pastor Andrew Utecht officiating. In lieu of flowers the family suggested memorials to be made to the Justin Cowboy Crisis Fund at www.justincowboycrisisfund.org or to the family in her name. Online condolences may be directed to the family at hochfuneralhome.com. Hoch Funeral Home of Ainsworth assisted with the arrangements.

Kay Janice Gross was born on January 22, 1939 to Orville and Lela (Williams) Gross at Broken Bow, Nebraska and passed away in the Brown County Hospital, at Ainsworth, Nebraska on December 21, 2014 after a long illness. Kay married Eddie Gracey... View Obituary & Service Information

The family of Mrs Kay Janice (Gross) Gracey created this Life Tributes page to make it easy to share your memories.