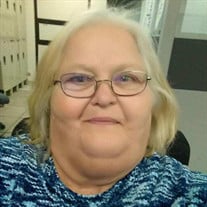 Kathy Jo Woods was born on July 2, 1957 in Bassett, Nebraska to Duane and Esther (Davis) Woods. She was welcomed home by three sisters: Sherrie, Betty and Peggy, and one brother, Kenneth. When Kathy was born they lived north of Newport, Nebraska on the “Martin Place.” When she was two, the family moved into Newport. Kathy attended Newport Grade School from kindergarten to eighth grade. After eighth grade she went to Rock County High School in Bassett to finish her formal education. After graduation, Kathy went to O’Neill, Nebraska to work in a computer center for the bank. After several years, the bank closed that center and Kathy went to Gering, Nebraska to working in the computer center at a bank. When more modernization arrived, that bank closed its local computer center and sent the work to a larger center. Kathy, choosing not to move to a larger city, sought a job in South Dakota. She landed a job with the State of South Dakota in their computer center. She was still actively employed there at the time of her death. She worked for 25 years for the State of South Dakota in the Becker Hanson Building in Pierre. Kathy purchased a house in Fort Pierre. She enjoyed her flowers and garden plants on her deck. She enjoyed setting on her deck and watching the birds and bunny rabbits in her yard. Kathy loved dogs and had a dog with her most of her life. They were a very good companion for her. She liked to fish, read, paint ceramics, go for drives to see the countryside, as well as spending time with her family and friends. Kathy was very loving and sharing. She was always giving even if she really shouldn’t. Kathy was stricken with Influenza A and Pneumonia which was more than she could overcome. She died on January 30, 2022 in Sioux Falls, South Dakota. Kathy was preceded in death by her parents, Duane and Esther Woods; sister, Peggy; and niece, Kim Hallmark. Kathy is survived by sisters, Betty Derr and Sherrie (Garry) Graham; brother, Kenneth (Sharon) Woods; nieces and nephews, J.W. (Sarah) Graham, Wendy Graham (Jeremy Anderson), Rod (Holly) Woods, Vicki (Brian) Schmer, Linda (David) Mills, Janice (Terry) Sapp and Michael Stewart; great-nieces and nephews, Kenneth, Brycen, Beau, Kaylee, Hope, Carl, Dakota, Christina, Jessica, Cassie, Emily and Evan; along with other family members.

Kathy Jo Woods was born on July 2, 1957 in Bassett, Nebraska to Duane and Esther (Davis) Woods. She was welcomed home by three sisters: Sherrie, Betty and Peggy, and one brother, Kenneth. When Kathy was born they lived north of Newport, Nebraska... View Obituary & Service Information

The family of Kathy Jo Woods created this Life Tributes page to make it easy to share your memories.