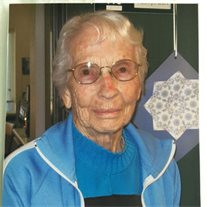 Kathryn (McCance) Burt was born Sept 10, 1919 on her grandfather's homestead near Cams, Nebraska. Her cowboy father worked at various ranches in the area. Kathryn attended primary school in southern Keya Paha County and later the family moved south into Rock County where she graduated from Rock County High School in 1936. She was the last surviving member of that class from RCHS. On Christmas day 1938 Kathyn married a local rancher, Joe W. Burt in Bassett, Nebraska. Eventually they settled east of Newport and ranched there for many years. One son, Andrew Kelly, was born. In 1971, Joe phased out of ranching and they moved into Bassett where they resided in Kathryn's parents' home. In her later years due to failing health and accidents Kathryn lived at Cottonwood Villa assisted living in Ainsworth. She was subsequently transferred to Rock County Long Term Care after an accident and surgery where she resided until her death on May 2, 2016. Kathryn was preceded in death by her parents, Andrew F. McCance and Kitty (Kelly) McCance; her husband, Joe (1979); and all of her siblings. There were eight siblings: Rodney Allen, Harvey, Robert, Sheldon, William, Jennie Mintun, Wanda Froelich Moore, and Dona Shattuck. She is survived by her son, Andrew Kelly and wife, Tina of San Rafael, California; one grand daughter, Marissa Kathryn Burt of San Francisco, California; numerous nieces and nephews. Kathryn was a very gentle, kind and generous person of great faith. She will be missed. Funeral Services were held on May 9, 2016 at Hoch Funeral Home in Ainsworth, Nebraska. Officiating the service was Brad Dugan. Pallbearers were, Jerry Ryschon, Wally Messenger, Robert Fisher, Richard Kneifel, Kevin Schuetz, and Tyrell Schuetz. Burial followed at the Bassett Memorial Park Cemetery in Bassett, Nebraska. Memorials were suggested to the family in her name.

The family of Mrs. Kathryn "Katy" Burt created this Life Tributes page to make it easy to share your memories.