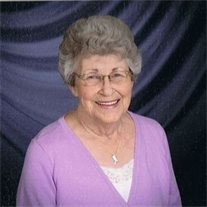 Karen Margaret "Peg" Raymond was the youngest of three daughters born to Thora (Heggelund) and Bateson Kimball, on February 2, 1940, in Gregory, South Dakota. She graduated from Gregory High School in 1958 and the University of South Dakota in 1962 with a Bachelor's Degree in Education. She taught English and Business in Milbank, South Dakota for several years. On June 27, 1964, she married John James "Jack" Raymond and they made their home in Gregory until 1966, when they relocated to Ainsworth, Nebraska. To this union, five children were born: Christopher James, Patricia Lynn, Pamela Sue, John Thomas and James Andrew. Peg spent many years at home raising the family while Jack ran Raymond Implement and farmed and ranched. Their children kept Jack and Peg busy, as they followed them in 4-H, rodeo, and their high school sporting and academic events. She often joked that she worked as a bus driver for several years shuttling her own children around. She showered them with unconditional love and was extremely proud of them. In the early 80's she went to work for Good's Chevrolet where she enjoyed the company of good friends. In 1985, they moved to the Ender's Lake Ranch south of Ainsworth. They spent many years working side by side and Peg and Jack agreed these were some of the best years of their lives. They enjoyed the peaceful, country life and spent many years surrounded by wonderful neighbors and friends. In 2008, Jack and Peg "retired" and moved into Ainsworth. Peg truly enjoyed spending Wednesday mornings with her coffee ladies. The move to Ainsworth allowed Peg to attend many of her grandchildren's events. She found profound joy in her grandchildren: Jedd, Miranda, Sloan and Eden Raymond; Blaine and Sean Finney; Kelcy and Tanner Clark; Emma Kennedy and Bateson Raymond. She was a member of the St. Pius X Catholic Church, and devoted many years to teaching catechism and was an active member of the Altar Society. Preceding Peg in death are her parents, Bateson and Thora Kimball; father-in-law, James Raymond; sister and brother-in-law, Mardis and Dr. Ken McKenzie; brothers-in-law, Dr. Burt Moor and Jim Manning. She is survived by Jack, her husband of 52 years; sons, Chris (Wanda), John (Anne) and Jim all of Ainsworth; daughters, Patty (Chris) Finney of Ainsworth and Pam Raymond of Bassett, Nebraska; sister, Carolyn Moor of Omaha, Nebraska; mother-in-law, Hilda Raymond of Yankton, South Dakota; sisters-in-law, DeLetta (Don) Campbell of Yankton, South Dakota and Sue (Jack) Krage of Winona, Minnesota; ten grandchildren and numerous nieces and nephews. Funeral services were held on April 29, 2017 at the St. Pius X Catholic Church in Ainsworth with Father Phil Flott officiating the service. Music was provided by Nichole Flynn and DeAnn Morse. Selections were "Amazing Grace," "Here I Am Lord," "On Eagles Wings," and "Old Rugged Cross". Pallbearers were Tanner Clark, Jedd Raymond, Blain Finney, Sean Finney, Sloan Raymond, and Bateson Raymond. Honorary bearers were Kelcy Clark, Miranda Raymond, Eden Raymond, Emma Kennedy, and numerous nieces and nephews. Burial followed at the East Park Cemetery in Ainsworth, Nebraska. Memorials were suggested to the family for a future designation. Hoch Funeral Home of Ainsworth, Nebraska was in charge of the arrangements.

Karen Margaret "Peg" Raymond was the youngest of three daughters born to Thora (Heggelund) and Bateson Kimball, on February 2, 1940, in Gregory, South Dakota. She graduated from Gregory High School in 1958 and the University of South Dakota... View Obituary & Service Information

The family of Mrs. Karen M. "Peg" Raymond created this Life Tributes page to make it easy to share your memories.

Karen Margaret &quot;Peg&quot; Raymond was the youngest of three daughters...