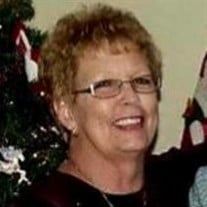 Karen Lea Hansen, passed away peacefully on Wednesday, July 15, 2020, at Lakeview Care and Rehabilitation Center in Grand Island, Nebraska. She was born in Chicago, Illinois on March 1, 1949, to Marlin and LaVerne (Doran) Christensen. In her early teen years, the family moved to Ainsworth, Nebraska where she graduated from Ainsworth High School in 1967. Karen returned to Chicago to become a legal secretary but her heart called her back to Ainsworth to be with her soul mate, Larry. The two married on December 20, 1972. The couple made their home on a ranch near Ainsworth, where they raised their son Brian. Karen’s passions were her flower garden and her quilting. She will be remembered for her kindness and willingness to drop everything for anyone who needed help. She had an unmatched love for her son and granddaughter, Tatum. Karen is survived by her husband, Larry, son Brian (Tausha), and granddaughter Tatum, all of Grand Island, sister Marlene of Phoenix, Arizona, sister-in-law, Kathy Heller of Reno, Nevada, and many friends. She was preceded in death by her parents and brother Ed. Family, friends, and others whose lives Karen touched are invited to grieve, support each other, and reminiscence about Karen at an outdoor graveside memorial service at the Ainsworth Cemetery at 10:00 AM on Friday, August 21, 2020. Father Mike Wetovick will officiate at the service. Memorials were suggested to the family in Karen’s name. Hoch Funeral Home of Ainsworth is assisting with arrangements and online condolences may be left for the family at www.hochfuneralhome.com.

Karen Lea Hansen, passed away peacefully on Wednesday, July 15, 2020, at Lakeview Care and Rehabilitation Center in Grand Island, Nebraska. She was born in Chicago, Illinois on March 1, 1949, to Marlin and LaVerne (Doran) Christensen. In her... View Obituary & Service Information

The family of Karen L. (Christensen) Hansen created this Life Tributes page to make it easy to share your memories.