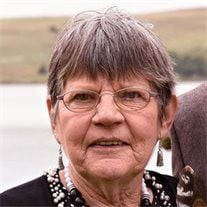 Karen Ann Philben was born on August 30, 1949 to Ernest "Bud" Philben and Lois (Carr) Philben in Ainsworth, Nebraska. She attended grade school and graduated from Keya Paha County High School in Springview, Nebraska in 1968. From there she went to Denver with her mother and they graduated together with an associates degree in Cosmetology. January 27, 1970 she gave birth to a son Lance Donald and for the next 20 years followed him in all sports and school activities. She always "coached him up" after each game. In the early seventies she worked at Daniels' Manufacturing as a welder. She then went on to work for the US Postal Service as a mail carrier in the city of Ainsworth, Nebraska. In 1982 she took the job as postmaster in Springview until her retirement Activities she enjoyed were going to auctions, golfing, spending time with her cousins and close friends road tripping, and anything Huskers. Her greatest joy was spending time with her grandchildren Ciara, Schylar and Jayden. There was always lots of hugs, I love you's, and chocolate at grandma's house. This past year she was able to experience the joy of her first great grandson, Mason Soflin. In 2004 Karen put her trust and faith in Jesus Christ and publicly professed her faith by being baptized in Pine Creek near Camp Witness. Karen was preceded in death by her father Ernest, mother Lois, and brother Donald Duane Philben. She leaves behind a son Lance and wife Roxanne Philben of Ainsworth, Granddaughter Ciara and Kyle Soflin of Lincoln, Nebraska, Granddaughter Schylar and husband Brett Troyer of Milford, Nebraska, Grandson Jayden and wife Logan Philben of Chadron, Nebraska; Great-Grandson Mason Soflin of Lincoln, two aunts, one niece, one nephew, cousins and many friends. Funeral Services were held on Thursday, February 1, 2018 at the Evangelical Free Church in Ainsworth with Pastor Mick Thornton officiating at the service. Special music of "It Is Well" was provided by Kyle and Ciara Soflin. Ciara Soflin, Schylar Troyer, and Logan Philben provided the special selection of "Even If It Hurts." Pallbearers were Shane Clapper, Chad Doyle, Harlin Welch, Travis Mundorf, Brad Mundorf, and Ron Braun. Honorary bearers were Mike Swan, Steve Swan, Bob Murphy, Tom Mundorf, Brandon Crawford, Gary Munger and Blaine Kinney. Burial was held at the Mt. Hope Cemetery at Springview under the direction of Hoch Funeral Home of Ainsworth. In lieu of flowers, memorials were suggested to the Sandhills Cancer Fund Inc. or to the family for a future designation in her name.

Karen Ann Philben was born on August 30, 1949 to Ernest "Bud" Philben and Lois (Carr) Philben in Ainsworth, Nebraska. She attended grade school and graduated from Keya Paha County High School in Springview, Nebraska in 1968. From there she... View Obituary & Service Information

The family of Karen Ann Philben created this Life Tributes page to make it easy to share your memories.