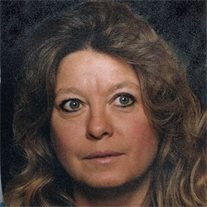 Laura K. Tunink was called home on the evening of June 7, 2015 surrounded by her family at Madonna Rehabilitation Hospital in Lincoln, Nebraska. Laura was born on November 16, 1958 to George and Ruby (Kinder) Waddell in Plainview, Nebraska. Growing up, she lived in Plainview and then moved to Norfolk, where she graduated from Norfolk High School in 1977. Laura was united in marriage to Randy Tunink on June 26, 1993 in Madison, Nebraska. They were blessed with two children, Tyler and Whitney. The family moved from Norfolk to the Bassett area in 1996, where they lived until they moved to Norfolk in January of this year. Laura enjoyed arranging flowers, spending time with her family, and being outside. Some of her favorite times were spent around her children as well as playing and going for walks with her granddaughter, Breanne. Laura is deeply missed by her husband Randy, son Tyler and wife Kari of Columbus, Nebraska, daughter, Whitney and boyfriend Adam of Grand Island, Nebraska, and the light of her life, her little granddaughter Breanne Tunink of Columbus; seven brothers and sisters, Jack Waddell of Hot Springs, South Dakota, Mary (Marvin) Hayes of Nixa, Missouri, Jerry (Marie) Waddell of Dallas, Texas, LeRoy (Connie) Waddell of Battle Creek, Nebraska, Darlene Andry of San Antonio, Texas, Nancy (Earl) Nast of Niceville, Florida, and Sharon Olson of Orchard, Nebraska; mother-in-law, Eileen Tunink of Norfolk, Nebraska and many nieces, nephews, great-nieces, and great-nephews. Laura is preceded in death by her parents, George and Ruby Waddell, father-in-law, Aelred Al" Tunink; sister and brother-in-law, Betty and Charlie Magnussen; niece, Jamie Magnussen, and her grandparents. Services were held on June 12, 2015 at Hoch Funeral Home in Ainsworth, Nebraska with Rev. Brad Birtell officiating the service. Pallbearers were, Rod Olson, Randy Olson, Andrew Tunink, Matt Magnussen, Brian Hayes and Keith Fowler. CD selections of "Amazing Grace" by The Tenors, "I Can Only Imagine" by Mercy Me and "I Love a Rainy Night" by Eddie Rabbitt were provided. A poem was read by Jessica. Burial was held at the Bassett Memorial Park Cemetery under the direction of Hoch Funeral Home of Ainsworth. In lieu of flowers, memorials were suggested to the family in her name.

Laura K. Tunink was called home on the evening of June 7, 2015 surrounded by her family at Madonna Rehabilitation Hospital in Lincoln, Nebraska. Laura was born on November 16, 1958 to George and Ruby (Kinder) Waddell in Plainview, Nebraska.... View Obituary & Service Information

The family of Mrs. Laura K. (Waddell) Tunink created this Life Tributes page to make it easy to share your memories.