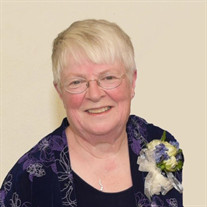 Judy Jo (Campbell) Rau was born to Francis Merritt and Lois Pauline (Bennett) Campbell on January 19, 1954 in Ainsworth, Nebraska. Judy grew up with her three brothers on the Campbell ranch in southern Brown County. She attended Raven Grade School and Ainsworth High School in Ainsworth graduating in 1972. On June 2, 1972 Judy was united in marriage to Douglas Rau in Ainsworth. Judy was baptized and confirmed into the Lutheran Faith. Doug and Judy became the parents of three children, Randall, Julie and Sandra. They made their home on the Campbell Ranch for most of their married life, then moving to Ainsworth in 2012. Over the years Judy enjoyed working at Campbell’s Hardware, Capturing Moments, Union Bank, Shopko Pharmacy and volunteering at the Lutheran church and the Thrift store. She enjoyed gardening, reading and time spent with family and grandchildren. Judy passed away at Rock County Long Term Care on June 3, 2020 with her husband by her side. Preceding her in death were her parents and brother, Randy Campbell. Judy is survived by her husband Douglas Rau of Ainsworth; her three children, Randall Rau of Ainsworth, Julie (Tony) Ruhter of Ainsworth, Sandra (Jay) Walck of Cheyenne WY; five grandchildren; brothers, Jim (Nancy) Campbell of Springview, and Larry Campbell of Milford Nebraska; and several nieces and nephews and other family members. Funeral Services were held Friday, June 5, 2020 at the Zion Lutheran Church in Ainsworth with Pastor Georg Williams officiating. Music was provided by Georgia Williams with the congregation singing, “Amazing Grace” and “How Great Thou Art.” Casket Bearers were: Larry Saner, Brian Vogelsang, Steve Bartak, Dustin Barthel, Scott Washington and Vernon Wood. Honorary Bearers were: James Campbell, Larry Campbell, Larry Rau and all of Judy’s other family and friends. Burial was at Ainsworth Cemetery under the direction of the Hoch Funeral Home of Ainsworth. In lieu of flowers, memorials have been suggested to the Zion Lutheran Church in Judy’s name.

The family of Judy J. (Campbell) Rau created this Life Tributes page to make it easy to share your memories.