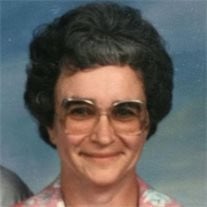 Joyce Gladys Songer was born to Joe and Bertha (Totton) Story on April 16, 1937 at Norris, South Dakota, and was called home on April 26, 2016 at the West Holt Memorial Hospital in Atkinson, Nebraska. Joyce had four sisters, Melba, Dorothy, Ruby and Vera, and five brothers, Ernie, Jasper, Bud, Bill, and Glen. She grew up around the Dallas and Herrick, South Dakota area, going to school through the eighth grade. Shortly after school, she married William Fred Ronfeldt and together they had five children, Joseph Ronfeldt of Corning, Iowa, Katherine Ronfeldt of Colorado, Stanley Ronfeldt of Washington, Rebecca Baldwin of Red Oak, Iowa, and Connie Ball of Arizona. Together, they lived in Washington, Oregon, Montana, and South Dakota, finally settling in Bassett, Nebraska, where she remarried and had 2 more sons, Robert Johnston and Raymond Songer. Joyce lived in Bassett for 40+ years, working as a dietary cook, and as a painter and house cleaner while raising her two boys. She enjoyed many hobbies, everything from needle point, antique shopping, cooking, gardening, and bird watching. The times dearest to Joyce's heart, were spending time with friends and family. She enjoyed having them over at holidays and any other occasion possible. She was also known around the country for her garage sales, baked goods and her service to the community. Joyce lived a long happy life with seven children, 20 grandchildren and 29 great-grandchildren, and other family members. She leaves behind a life time of loving memories that we all will cherish and pass along to generations to come. Graveside Memorial services were held at the Colome Cemetery in Colome, South Dakota with Pastor Allen Bouslaugh officiating over the service. Music selections of "Amazing Grace" and "Precious Memories" were offered by Pastor Allen and wife Lela. Hoch Funeral Home of Bassett was in charge of the arrangements.

The family of Ms. Joyce G. (Story) Songer created this Life Tributes page to make it easy to share your memories.