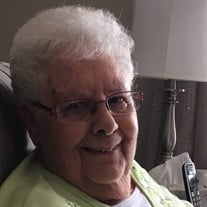 Joyce Marie Celeste (Fry) Price was born December 1, 1940 to John and Nora (Courteau) Fry in St. Paul, Minnesota. She passed away on December 14, 2019 at the Brown County Hospital in Ainsworth, Nebraska. She was raised in Pine City, Minnesota along with her three siblings Joann, John Jr. and Gerri. She attended parochial school and then graduated from Pine City High School in 1959. After high school, she worked at Woolworths Department Store in St. Paul, Minnesota. She was united in marriage to Kenneth E. Searby in St. Paul on February 27, 1960. Three girls were born to this union, Debie Marie, Patty Jo and Twyla Celeste. They made their home on a ranch near Norden, Nebraska until 1968. They moved to St. Paul where Joyce managed apartment complexes and did in-home day care. The family relocated to Huron, South Dakota in 1972 where Joyce worked for Sears and Roebuck and also managed the first condominium complex in Huron. Ainsworth, Nebraska became the final home in 1976. She worked at the Gambles Hardware Store for a short time. She began working in food service first at the King Kone Drive-In and then eventually purchasing and successfully running the Nite ‘n Day Café also known as “Masters.” One of her most enjoyable experiences was doing what was referred to as the “Weenie Wagon” at Rocky Ford on the Niobrara River when the canoe industry was just beginning. Joyce was married to Lonnie Price on February 14, 1991. Together they blended two families and raised four children while farming and running several bars and restaurants including the former Frontier Bar, the Depot and Hidden Paradise. They farmed together until their retirement. Joyce and Lonnie enjoyed traveling all over the United States together usually to somewhere warm every winter. They made their home for a short time in Bullhead City, Arizona. “Aunt Joyce” was everyone’s favorite aunt and several cousins lived with the family from time to time. She always enjoyed feeding people, lending a hand whenever she could, and giving birthday parties for friends and family. No one was ever a stranger for long in Joyce’s circle. Every Thanksgiving you could count on “one extra” at the table for someone who didn’t have somewhere to go, or would otherwise have been alone, it was her way and became a tradition. She always enjoyed taking care of her yard and flowers and was tickled to be honored with “Yard of the Week.” During retirement, she also enjoyed many hours playing cards with friends especially May I and Pitch. Joyce was preceded in death by her parents and grandparents; an infant daughter, Debie; and her brother, John Fry Jr. She leaves to mourn her passing, her husband, Lonnie Price of Ainsworth; daughters, Patty (Jeff) Andersen of Norden, Nebraska and Twyla (Kip) Worth of Dalton, Nebraska; sons, Kevin (Sarah) Price of Ainsworth and Brett Price of Atlanta, Georgia; four grandchildren, Wichita, Wyatt and Montana Price all of Ainsworth and granddaughter, Sophie Price of Atlanta, Georgia; sisters, Joann (Jim) Duncan of Balsam Lake, Wisconsin and Gerri (Raymond) Purdy of Forest Lake, Minnesota; and sister-in-law, Kathy Fry of Little Falls, New Jersey as well as numerous nieces, nephews, cousins aunts and uncles and many friends near and far. A Memorial Service was held Thursday, December 19, 2019 at the St. Pius X Catholic Church in Ainsworth with Father Mike Wetovick officiating. Music was provided by Drew Klatt and Nichole Flynn, with the congregation singing, “Here I Am Lord”, “Be Not Afraid”, “Song Of Farewell” and “On Eagle’s Wings.” Readings were given by Sarah Sybrant, Eucharistic ministers were Jocille Brinda and Sarah Sybrant. Inurnment followed in the Ainsworth Cemetery. In lieu of flowers a donation in her name may be made to the Sandhills Shrine Club. Hoch Funeral Home of Ainsworth was entrusted with the service arrangements. Please visit www.hochfuneralhome.com to leave an online condolence.

Joyce Marie Celeste (Fry) Price was born December 1, 1940 to John and Nora (Courteau) Fry in St. Paul, Minnesota. She passed away on December 14, 2019 at the Brown County Hospital in Ainsworth, Nebraska. She was raised in Pine City, Minnesota... View Obituary & Service Information

The family of Mrs. Joyce M. (Fry) Price created this Life Tributes page to make it easy to share your memories.