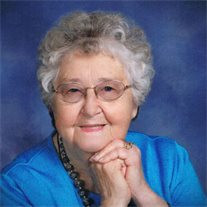 Josephine Victoria Carr was born March 31, 1933 to Josephine (Dillon) Carr and George Carr in Springview, Nebraska. She passed away on March 10, 2018 at her home in Norfolk, Nebraska at the age of 84 years, eleven months and ten days. Josephine was the sixth of seven children. She lived on the Beatty Place north and west of Springview. She attended school 1.5 miles west of their home. Josephine worked at the telephone office in Ainsworth, Nebraska, and also watched children when their parents were working in the fields. Josephine belonged to the saddle club where she met Harold Prentice. They were married on April 25, 1954. Harold and Josephine raised four daughters, Vicki, Janeen, Lori and Gina. Josephine was a Green Thumb at District 56 Grade School and helped as an aid for 27 years. She was also the librarian for 14 years at the Keya Paha County Library. Josephine was active in the American Legion Auxiliary, Order of the Eastern Star, the United Methodist Church, the Alumni Association, as well as the Senior Center. She and Harold loved dancing and playing cards. Josephine moved to Norfolk in August of 2014 to be closer to Harold and for health reasons. Josephine was preceded in death by her parents; her daughter, Vicki; sisters, Elayne (John) Costello, Ethelda (Marvin) Blake, Pauline (Gail) Lehn, Betty Kerr and Daphyne (Bill) Clark. She leaves to mourn her passing, her husband, Harold of Norfolk; daughters, Janeen Prentice of Madison, Nebraska, Lori (Neil) Connot of Yankton, South Dakota and Gina (Bud) Knight of Wright, Wyoming; son-in-law, Jim (Anna) Mundorf of Ayr, Nebraska; ten grandchildren, 27 great-grandchildren and two great-great-grandsons; a brother, Garth "Buck" (Doris) Carr of Springview; along with nieces, nephews and other family members. Funeral Services were held on Friday, March 16, 2018 at the United Methodist Church in Springview with Pastor Michelle Byerly officiating. Music was provided by Rick Nelson. The congregational hymns were "Old Rugged Cross" and "On Eagle's Wings." Casketbearers were: Chris and Jeff Mundorf, B.J., Dusty and Ryan Knight, and Monte and Glenn Connot. Honorary Bearers were: Tanelle Petersen, Josie Shrader and Becca Sickles. Organizational Rites were conducted by Bethany Chapter #113 Order of the Eastern Star. Memorials were suggested to the family for future designation. Interment was in the Mt. Hope Cemtery at Springview under the direction of the Hoch Funeral Home of Ainsworth.

Josephine Victoria Carr was born March 31, 1933 to Josephine (Dillon) Carr and George Carr in Springview, Nebraska. She passed away on March 10, 2018 at her home in Norfolk, Nebraska at the age of 84 years, eleven months and ten days. Josephine... View Obituary & Service Information

The family of Mrs. Josephine V (Carr) Prentice created this Life Tributes page to make it easy to share your memories.