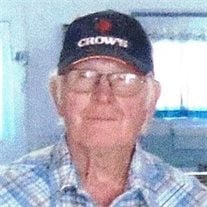 Jonas "Joney" Jonathan Dillon, Jr. was born November 25, 1939 to Jonas Sr. and Ortha I. (Rix) Dillon in Ainsworth, Nebraska. At age 15, he quit school to work with his father with the Keya Paha County Road Department making bridges. In the summer of 1957, he was en route to work for Jack Jones in Rose, Nebraska but Verg Rockford caught him on the road and hired him to work on the L. E. Ray Ranch at Rose. After the summer of haying, Jonas was hired full-time as a ranch hand. In the summer of 1959, he met Carolyn at a local swimming hole in Long Pine, Nebraska called the "Old Mill Pond." She had been left stranded there with no ride, and Joney offered her a ride back to Ainsworth, where later they became a couple. While still working at the L. E. Ray Ranch, he married "his girl" Carolyn J. Thurlow on June 15, 1960 in a double ring ceremony in Winner, South Dakota at the age of 20. Born to this union were three children, Jolyn Kay, born November 6, 1960, James Jonas, born July 11, 1962 and Justin Jonathan, born January 28, 1964. While working at the L.E. Ray Ranch he received his GED on May 8, 1972, it was one of his proudest days. In 1974, Walker Cattle Company bought the ranch. The family moved their trailer home to Long Pine where they had bought some lots. Hating town life, they moved to the Copple place north of Bassett, Nebraska, where Walker sold the cattle to Dean "Fuzz" Kinney in 1976. That is when the Dillon Ranch Angus cowherd started with six cows he bought from Dean from the original L.E. Ray herd. Jonas worked for Dean until March of 1983 when they again moved back to the trailer home in Long Pine. Still hating town life, in 1988 they bought the Estes Kirk place from Harold and Geneva Davis, south of Bassett. By then the Angus cowherd had grown to over 75 head. By this time, Joney had heard bankers tell him, "No" to small loans to buy used equipment or to "Sell, them, cows you will never make it." His mind was set and he was determined to show them just how wrong they were! Joney and Carolyn worked side-by-side along with the rest of the family to make it all work. While growing the cowherd, he worked for Circle 76, Evelyn Moody, Neil Anderson, Rick Foxworthy, Gary Moody and anyone else who needed good, hard-working, reliable help. Because he was known far and wide for his promptness (always early), hard work and his usual, "I will out work anyone here" attitude. The Dillon Angus cowherd grew to over 350 head and he was quite proud. He had shown them all, and with very little credit help. He had done it! Joney was at his proudest when he could walk into an equipment dealership with Carolyn by his side to purchase something newer or new. While dealers asked him about financing or whether he had talked with a banker about the purchase, he would say, "mom, write them a check" and then look at them and say "when can you deliver it to the ranch?" He loved his Angus cows, and on December 31, 2016, he moved them home from fall-grazing to the home place. Joney would still tell everyone what to do and where to be and that you better be there an hour before he told you to be there or you would be late. He was the leader of all of the crew and you knew it. Jonas loved spending time with his six grandchildren and four great-grandchildren, whether it was moving cattle, haying or playing on the four-wheeler, he always found the time to show them the cows or a burro or going to feed the cows on grandma's four-wheeler. Joney passed away January 3, 2017 at the age of 77 years. He was preceded by his parents, Jonas Sr. and Ortha Dillon; two brothers, Clayton "Jack" Dillon and Larry Dillon; two sisters, Marcella Kay Bartlett and Ruth E. 'Frankie" Hulshizer. He is survived by his wife, Carolyn Dillon of Bassett; daughter, Jolyn Dillon-Clark and husband David of Long Pine, Nebraska, sons, James Dillon and wife Lesa of Long Pine and Justin Dillon of Johnstown, Nebraska, and adopted grandson, Cody Dillon and wife Bradie of Long Pine; along with six grandchildren and four great-grandchildren; siblings, Jerry Dillon and wife, Nona of Janesville, Wisconsin; sisters, Luella "Ellie" Mae Dillon of Huron, South Dakota, Bobbi Hempel of Bassett, Judy Hulshizer and husband, Orven of Albertville, Alabama, Milinda Turpin and husband Ken of Newport, Nebraska; along with numerous nieces, nephews, and other family members. Funeral Services were held at the Hoch Funeral Home in Ainsworth, Nebraska with Pastor Gary Graesser officiating at the service. Music was provided by Joe McBride with selections of "Go Rest High On That Mountain" and "Live Like You Were Dying." Pallbearers were: Matt Dillon, Dusty Dillon, Clay Dillon, Jeff Kinney, Don Krieger, Dale Ellwanger, and Steve Kreitman. Burial followed at the Thurman Cemetery near Bassett, Nebraska. Memorials were suggested to the family for a future designation.

Jonas "Joney" Jonathan Dillon, Jr. was born November 25, 1939 to Jonas Sr. and Ortha I. (Rix) Dillon in Ainsworth, Nebraska. At age 15, he quit school to work with his father with the Keya Paha County Road Department making bridges. In the... View Obituary & Service Information

The family of Mr. Jonas J. "Joney" Dillon, Jr. created this Life Tributes page to make it easy to share your memories.