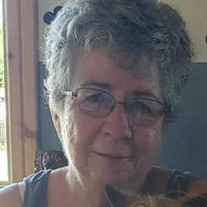 Jolene Kay Walters was born March 1, 1948 in Orchard, Nebraska to Esadore and Dorothy (Goulding) Cleveland. She passed away on March 1, 2021 at the Trailside Apartments in Ainsworth, Nebraska. Jolene married Rich Walters in 1967 and later divorced. From this marriage they had three children; Connie Linder, Cathy Cook and Rich Walters, Jr. She treasured spending time with her children and grandchildren, which included, attending school activities and family celebrations. She had a strong bond with a foreign exchange student, Katriina Valjus from Finland. She loved socializing with friends and one of her passions was relaxing in her craft room with Charlie, the dog. Later in life she met a special friend, Kenny Hill. The two of them enjoyed each other’s company for many years. Jolene was preceded in death by her parents; ex-husband, Rich; significant other, Kenny; brothers, Don and Earl. She is survived by her children; Connie (John) Linder of Minden, Nebraska, Cathy (Joey) Cook of Belgrade, Nebraska and Rich (Amy) Walters of Kearney, Nebraska; Grandchildren, Morgan and Brian Linder, Sydney and Brady Cook, and Karson, Kamryn and Kynlie Walters; along with many nieces, nephews, other family members and friends. Funeral Services were held on Friday, March 5, 2021 at the United Methodist Church in Ainsworth. Pastors David Randall and Bruce Beebout officiated at the service. The CD music selections played were, “I Will Rise”, by Chris Tomlin and “Where No One Stands Alone”, by Elvis. Casket Bearers were: Morgan Linder, Brian Linder, Sydney Cook, Brady Cook, Karson Walters, Kamryn Walters and Kynlie Walters. Burial Followed in the East Park Cemetery near Ainsworth. Memorials have been suggested to the family in Jolene’s name for future designation.

Jolene Kay Walters was born March 1, 1948 in Orchard, Nebraska to Esadore and Dorothy (Goulding) Cleveland. She passed away on March 1, 2021 at the Trailside Apartments in Ainsworth, Nebraska. Jolene married Rich Walters in 1967 and later... View Obituary & Service Information

The family of Jolene K. (Cleveland) Walters created this Life Tributes page to make it easy to share your memories.