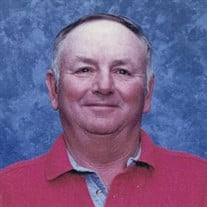 Johnny Dean Cline was born on February 1, 1944 in Broken Bow, Nebraska to John W. and Laura H. (Lehn) Cline. He grew up on the ranch at Goose Creek where he resided his entire life. He attended Cheery County school district 102 until the 8th grade then he attended Thedford High School, graduating with the class of 1963. During his school years he enjoyed playing football and running track. Johnny was united in marriage on June 3, 1978 to Deanna Whitesel. They adopted their son, RJ in 1983 and daughter Anna in 1986 from Nebraska Children’s Home. Johnny enjoyed attending his children’s school and 4-H events. He loved fishing, especially ice fishing and won many ice fishing tournaments. Johnny also was a collector of knives and firearms and enjoyed showing them to anyone who visited the house. Many hours were spent working on the ranch, attending cattle events, and watching football games with his son RJ. He also loved visiting daughter Anna and bragged on the wonderful meals she prepared for him. In 2009, his daughter blessed him with a grandson, Dylan, who he loved dearly. He taught Dylan to ride the 4-wheelers and they enjoyed many adventures around the ranch. Johnny loved to visit with others and he never knew a stranger. Johnny went home to be with his Heavenly Father on November 18, 2021 in his home with his loving wife and son by his side. He was preceded in death by his parents. He is survived by his wife, Deanna; son, RJ Cline; daughter, Anna and husband Mike Hamilton of North Platte, Nebraska; grandson, Dylan Hamilton; sister, Beverly and husband Eric Fenner of Gothenburg, Nebraska; numerous other relatives and a host of beloved friends. A Memorial Service was held on Monday, November 29, 2021 at the Elsmere Bible Church at Elsmere, Nebraska and officiated by Pastor Les Canfield. Music was provided by Les and Shereen Canfield singing “Just A Closer Walk With Thee” and “Amazing Grace (My Chains Are Gone).” A private family inurnment will be held at a later date. Honorary Urn Bearers were: Benj Fink, Stuart Cooksley, Kevin Benscoter, Jack Johnston, Miles Cooksley, Jake Higgins & all of his other neighbors and fishing buddies. In lieu of flowers, memorials were suggested to the Elsmere Bible Church in Johnny’s name.

Johnny Dean Cline was born on February 1, 1944 in Broken Bow, Nebraska to John W. and Laura H. (Lehn) Cline. He grew up on the ranch at Goose Creek where he resided his entire life. He attended Cheery County school district 102 until the 8th... View Obituary & Service Information

The family of Johnny Dean Cline created this Life Tributes page to make it easy to share your memories.