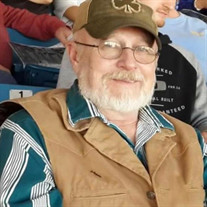 *****PLEASE TAKE NOTE THAT THE GATHERING EVENT HAS BEEN CANCELLED.***** John Lee Wright, 64, was born November 11, 1955 in Gordon, Nebraska to Leo and Loretta “Ret” (Hankins) Wright. John passed away Saturday, August 8, 2020 at his home in Bassett, Nebraska. John graduated from Hay Springs, Nebraska. He married his first wife Jody Feddersen in 1980. Together they had two children and lived in Hay Springs where he worked for the county. In 1997, he moved to Bassett where he met Jina Anderson and they were married in 2001. He worked for the City of Bassett until his retirement in 2016. During retirement, he enjoyed mowing at the country club, tinkering in his wood shop and watching his grandchildren grow. Nothing was more important to him than his family, and no one was a stranger, he spoke to everyone like they had been friends forever. John is preceded in death by his parents Leo and Loretta Wright and brother-in-law Loren Frimann. He is survived by wife Jina (Anderson) Wright of Bassett; daughter Rebecca and husband Drew LeZotte of Bassett; son Josh Wright and wife Robyn of Bassett; and five grandchildren; mother-in-law Janet Anderson of Bassett; brothers Mitch Wright and wife Judy of Crawford, Nebraska and Keith Wright and wife Donna of Bassett; sister Kathy Frimann of Hay Springs; and many nieces and nephews. A gathering to remember the life of John Wright will be held at 2:00 PM, Saturday, August 22, 2020 at the Scott & Lauren Swanson shop at 524 Augusta St., just north of Hometown Auto in Bassett. Due to Covid-19 restrictions, there will not be a meal, but feel free to bring your own beverages. A Memorial Fund to be designated later and cards may be made to the family and sent to: Jina Anderson Wright 501 S. Clark St. Bassett, Nebraska 68714 Hoch Funeral Home of Bassett assisted the Wright family with the arrangements and online condolences may be left at www.hochfunerahome.com.

The family of John L Wright created this Life Tributes page to make it easy to share your memories.