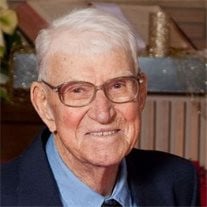 John Leo Fletcher, age 93, passed away on March 25, 2015 at the Rock County Hospital Long Term Care. John was born in Austin, Nebraska, on February 12, 1922, to James and Lena (Heil) Fletcher. John was the third of four children. He was raised south of Ainsworth, Nebraska and he attended one year of high school at Cottonwood. John and his sister, Bessie, each rode their horse 7 miles one-way to school. John grew-up close to Willow Lake, where he acquired his love of fishing. He was also fond of hunting for arrowheads. John married Melva (Cords) on March 3, 1946 at Pleasanton, Nebraska, at John and Melva's vow exchange, Melva's grandparents, (Mr. and Mrs. BF Metz, along with John's parents,) stood-up as attendants. To this union, five children were born, John Henry, Dennis, Lana, Kent and Monte. When the kids were little, John was employed as a farmer. Eventually, John decided to expand upon his true passion of being a mechanic. He initially pursued this vocation by working in Loup City, then Ravenna. In 1958, the family relocated to Bassett. Here, John worked for Galleher Lumber Company, as well as Ned Shaw. Galleher Lumber Company sent him to John Deere tractor school to master his knowledge. He excelled at the program, and this is how his life's work began. Around 1970, John opened his own business, Fletcher Repair and Sons. John enjoyed working on older style tractors. He was especially fond of John Deere. He spent hours and hours helping farmers keep their equipment running. He loved it. His clothes were known to reflect his hard work. His familiarity with the John Deere catalog system was uncanny. John retired in 1995. John thoroughly enjoyed retirement. He loved planting his garden, and he deliberated on his seed ordering for many months in advance. Farmer's Almanac prepared him for the upcoming season(s). He was not fond of catering to the garden as it grew, but he loved having watermelon and cantaloupe, (those were some of his favorite foods.) He and Melva spent innumerable hours raising their crop, then many more canning what they grew. John loved his garden so much that he often could be found puttering in it even on the hottest days. One summer, alone and tending to the crops, he passed-out and then was life-flighted out. This was quite a scare, however, it didn't slow him down, he kept mowing his yard and tinkering for many years to come, even as he turned 90 years old. John loved reading various newspapers and journals, watching the television, staying attuned to the weather, and of course, keeping tabs on his favorite baseball team, the Cubs. His recliner offered him the perfect spot to relax. He could spark a conversation with any current trend or topic. He always encouraged everyone to be careful when navigating the highway: "drive for you and everyone else, too." After his beloved companion, Snoop (one of several dogs through the years), passed away, it was decided that there would be no more pets. However, in the last year or two of his life, a few stray cats made their way under his porch, and they became John's latest adventure. He and Melva loved to swing on the front deck, enjoying the simplicity of life. John is loved dearly and will be missed by all those who had the opportunity to know him. He was a husband, father, grandfather and friend. His quick wit and "savviness" were great gifts. John was preceded in death by his parents; brother, Jimmy, sister; Bessie Poore; sons, Dennis and John Fletcher; grandson, Shaun Fletcher, and great-grandson, Joel Fletcher. His memory lives on by those who survive him, wife, Melva of Bassett; brother, Donald (Geri) Fletcher of Gibbon, Nebraska; daughter, Lana (Don) Pfeifer of Bassett, Kent (Jody) Fletcher of Shelton, Nebraska, and Monte (Mary) Fletcher of Spencer, Nebraska; 12 grandchildren, Shelby Ruhl, Aaron (Julie) Fletcher, Charlie (Judy) Robertson, John (Misty) Robertson, Dennise (Cody) Daniels, Donnita Pfeifer, Bobby Jo (Deven) Holt, Sarah (Tony) Rolfsmeyer, Patrick Fletcher, Kyle (Michelle) Fletcher, Colby (Jordan) Fletcher and Tyler Fletcher; 13 great-grandchildren: Treyton, Paxton, Connor, Lexcee, Kaylee, Logan, Noah, Cortney, Alyson, Arabella, Henry, Collins and Beckett; a great-great-grandson, Kage, as well as numerous nieces, nephews and friends. A scholarship memorial will be set-up. Special thanks to the Long Term Care staff, Dr. Tubbs and all those who assisted in caring for him. Memorial Services were held on Saturday, March 28, 2015 at the Emmanuel Community Church in Bassett, Nebraska with Pastor Dennis Quigley officiating the service. CD selections of "Could I Have This Dance" by Anne Murray, "I Love" by Tom T. Hall, "Grandpa" by The Judds, "On Eagles Wings" by Holly Dunn, and "Blue Skirt Waltz" by Frankie Yankovic were provided. Honorary bearers were all of John's Grandchildren. Inurnment was held at the Bassett Memorial Park Cemetery in Bassett. Memorials were directed to the Rock County High School for a future designation in John's name. Hoch Funeral Home of Bassett assisted with the arrangements.

John Leo Fletcher, age 93, passed away on March 25, 2015 at the Rock County Hospital Long Term Care. John was born in Austin, Nebraska, on February 12, 1922, to James and Lena (Heil) Fletcher. John was the third of four children. He was raised... View Obituary & Service Information

The family of Mr. John Leo Fletcher created this Life Tributes page to make it easy to share your memories.