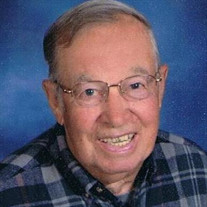 John P. “Pat” Chase John “Pat” Chase was born on February 4, 1936 at Newcastle, Nebraska to Thomas and Bernice (Beyeler) Chase and passed away on January 29, 2020 at the Sandhills Care Center in Ainsworth, Nebraska at the age of 83. Pat graduated from Newcastle High School in 1954. He helped his father in the well drilling business for a while and then went to work for Layne Western Drilling Co. in Valley, Nebraska for a couple of years. In May of 1957 he enlisted in the army, training at Fort Hood, Texas. He was sent overseas to Erlangen, Germany serving in the 50th Infantry Division as a gunner. He was honorably discharged in April of 1959. He then started up his own well drilling business in 1960 in Bloomfield, Nebraska. Pat was the third generation of well drillers in his family, and always enjoyed drilling all types of wells, including water and irrigation wells in Nebraska and oil and gas wells in Wyoming, Kansas and Texas. Pat was united in marriage to Marlene Wesche at Bloomfield, Nebraska. They were the proud parents of 4 children; Brenda, Michael, Douglas and Sheila. In 1972 he moved his family to Ainsworth and started drilling water and irrigation wells in that area until 1999, when he sold his business to Delbert Smith, a longtime employee. Pat is preceded in death by his daughter, Sheila; his parents, Thomas and Bernice Chase; brother, Tom Chase and wife Dorothy; father and mother-in-law, Carl and Elsa Wesche and brother and sister-in-law Donald and Delores Wesche. He leaves to mourn his passing, his wife Marlene of Ainsworth; daughter, Brenda (Mike) Davis of Wood Lake, Nebraska; sons, Michael of Chanute, Kansas and Douglas of Sioux Falls, South Dakota; 5 grandchildren and 4 great-grandchildren; brothers, Al (Ronna) Chase of Glendale, Arizona, Glen (Pam) Chase of Chanute, Kansas, along with many nieces and nephews. Funeral Services were held on Saturday, February 1, 2020 at St. Pius X. Catholic Church with Father Mike Wetovick as Celebrant. Music was provided by Drew Klatt and Mr. and Mrs. Jim Arens with the selections, “Here I Am Lord,” “Be Not Afraid,” “Song of Farewell” and “On Eagle’s Wings being sung. Casket Bearers were: Kody Chase, Jon Davis, Justin Brester, Tom Chase, Bill Frew and Delbert Smith. Honorary Bearers were: All of Pat’s other family and friends. Military Honors were conducted by Ainsworth American Legion Post #79. Interment was in the East Park Cemetery at Ainsworth under the direction of the Hoch Funeral Home of Ainsworth. Memorials were suggested to the Brown County Veteran’s Memorial Fund or to St. Pius X Catholic Church. Online condolences may be made to the family at www.hochfuneralhome.com.

The family of John P. "Pat" Chase created this Life Tributes page to make it easy to share your memories.