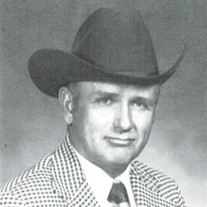 John Edward “Jack” Bair of Fort, Collins, Colorado was born October 23, 1931 at Long Pine, Nebraska, son of John T. Bair and Mable M. (Hall) Bair. He went to meet his Lord and Savior on May 27, 2019 in his home at Fort Collins with his family by his side. Jack was a graduate of Rock County High School in 1949 and was awarded the State Farmer's FFA Degree. He was active in 4-H, raising and showing beef. He married Beryl G. Eberhart on January 12th, 1952 and served in the United States Marine Corps from 1952 - 1954. He accepted the Lord Jesus Christ as his personal Saviour in 1951 and his desire was to bring glory to His Name. He attended Western Bible Institute at Denver, Colorado, and served as pastor in Franktown, Colorado and at the Sybrant Community Church at Bassett, Nebraska. His life included ranching, being a dorm parent at Nebraska Christian High in Central City, Nebraska, along with doing construction and landscaping in Greenville, South Carolina. He was a member of the Community Bible Church in Norfolk, Nebraska. He was a loving husband, father and grandfather. Jack is predeceased by his parents, a sister, Betty Ann Bair, an adopted sister (cousin) Donna Jean Bair Forbes, sister-in-law, Doris Sellin, and brothers-in-law, Merwyn Davidson and Duane Sellin. He leaves to mourn his passing, his wife, Beryl; daughters, Kathy (Doug) Saar, Cheri Coleman (Dale), Chandra (Wayne) Taylor, Tammy (Larry) Stoltzfus, Karen (Gerry) Brown, and Kayla (John) Keck; 22 grandchildren, 14 great-grandchildren, and five great-great-grandchildren along with numerous other family members. Funeral Services were held at the United Methodist Church in Bassett, Nebraska with Pastor Larry Matson officiating at the service. Music was provided by Kathy Witte. Special vocal selections of “He Hideth My Soul” and “Beyond The Sunset” were provided by Heather Korver and Melissa Sellin as well as the vocal selection of “In the Garden” by Boe Searight and Aaron Wantoch. The congregational hymns were, “How Great Thou Art” and “Because He Lives.” Pallbearers were Jesse Saar, Boe Searight, David Brown, Jonathan Brown, Austin Brown, Ethan Keck, Nathanael Keck and Elisha Keck. Burial followed at the Bassett Memorial Park Cemetery with Military Honors being provided by the Bassett American Legion Post #123. Hoch Funeral Home of Bassett was in charge of the arrangements.

The family of Mr. John E. "Jack" Bair created this Life Tributes page to make it easy to share your memories.